Facebook said it had mistakenly removed a number of far-left political accounts, citing an “automation error”, triggering uproar from socialists who accused the social media platform of censorship.

Last week, the social media company took down a cluster of groups, pages and individuals involved in socialist politics without explanation. These included the Socialist Workers party and its student wing, the Socialist Worker Student Society in the UK, as well as the International Youth and Students for Social Equality chapter at the University of Michigan and the page of Genevieve Leigh, national secretary of the IYSSE in the US.

A Facebook spokesperson said on Monday that it had “restored the Socialist Workers party Facebook Page and several accounts after an automation error”, adding: “We apologise for the error.”

Facebook did not respond to requests to clarify how the error had occurred and why it had affected the personal accounts of socialist figures as well as larger groups.

But the abrupt removals spawned accusations of bias against leftwing voices by the social media company, with activists alleging a pattern of deliberate efforts to undermine their voices. The SWP, whose page was shut down on Friday and restored the same day after a backlash on social media, said that Facebook had previously shut down accounts belonging to its activists in “error” last December.

“They don’t even provide means by which you can recover [the account],” said David North, who chairs the editorial board of the World Socialist Web Site. “It’s like the police storming in and seizing everything in your house.”

Niles Niemuth, the site’s managing editor who ran as the US Socialist Equality party’s vice-presidential candidate in 2016, was among the accounts that were suspended and later reinstated.

The snafu raises questions about Facebook’s enforcement of its content moderation policies, which critics have described as ad hoc and haphazard. In the wake of the US Capitol riots, civil rights groups have accused the platform of repeated failures to curb the spread of misinformation about electoral fraud and incitement to violence despite pledges to do otherwise.

On January 11 it announced that it would remove all content containing the phrase “stop the steal” — the slogan used by conservatives alleging that Democrats rigged the election — as an “emergency measure”. 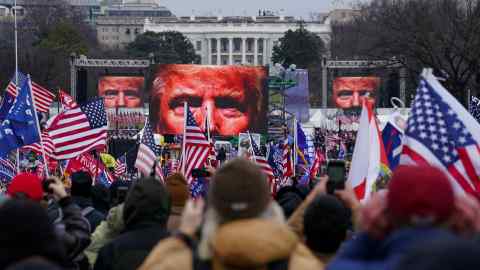 Facebook has typically faced accusations of anti-conservative bias, most recently after suspending former US president Donald Trump’s account “indefinitely” following the attempted insurrection by his supporters, amid fears that he could use it to incite further violence. The company’s newly formed independent oversight board is due to review the decision in its first big test.

The exact number of those affected by the latest incident remains unclear, said Mr North. Accounts including the IYSSE at the University of Michigan, a registered student body, were suspended until Monday, and only restored after the Financial Times flagged the situation to Facebook.

“Even though this particular ban has been [reversed], it’s a warning we don’t know what might come next,” he added.

“Social media . . . is privately owned but to all intents and purposes it’s [become] what used to be the market square,” said Chris Marsden, national secretary of the Socialist Equality party in the UK. “They’re using their power in a way that’s completely undemocratic.”

READ  Is it game over for the console?

FT translator and others released in Ethiopia

Allen v Farrow is pure PR. Why else would it omit so much?

Greg James and Bella Mackie: 'We're not the next Richard and Judy'