Facebook is plotting a charm offensive to repair ties with the incoming Biden administration, as it looks to stave off the threat of being more heavily regulated or even broken up during the president-elect’s term in office.

Company executives are planning a major push to encourage users to take a coronavirus vaccine, as well as incentivising people to share content related to the Paris climate agreement, which Joe Biden has promised to rejoin, in the hopes of winning favour in Washington.

The social media company has long been a source of anger among senior Democrats, many of whom blame it for not doing enough to combat misinformation.

In the days after this month’s election, Bill Russo, Mr Biden’s deputy communications director, posted a series of tweets attacking the company, saying: “If you thought disinformation on Facebook was a problem during our election, just wait until you see how it is shredding the fabric of our democracy in the days after.”

Facebook hopes that Nick Clegg, the company’s vice-president of global affairs, will help mend relations. The former British deputy prime minister who struck up a rapport with Mr Biden when both were in office nearly a decade ago.

The next few years are likely to prove one of the most important periods in Facebook’s history, and could even determine whether it will survive in its current form. The company is under investigation by the Federal Trade Commission and state attorneys-general for violating competition laws, and could face being broken up.

Meanwhile members of Congress continue to push for a national privacy law, tougher rules on misinformation and limits to Section 230, the law that guarantees social media platforms protection from being sued over content posted by their users.

Earlier this year, Mr Biden publicly urged Facebook to crack down on misinformation and overhaul its decision not to fact-check political advertising, after the platform ran a false political advert claiming Mr Biden blackmailed Ukrainian officials in order to thwart an investigation into his son Hunter. 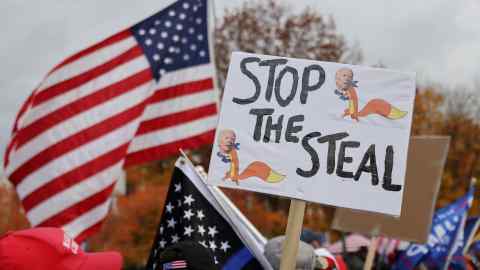 “President-elect Biden has a clear eyed view of some of the damage that Facebook has done to society and to our democratic norms and institutions because he’s been on the receiving end of massive misinformation and disinformation campaigns,” said Jim Steyer, lawyer and chief executive of non-profit Common Sense Media.

“We’re really on the cusp of a potentially transformational period in terms of federal regulation and legislation as it regards the tech industry.”

Brian Rice, public policy director at Facebook, told the Financial Times: “Facebook has operated under both Democratic and Republican presidents, and we’ve learned that no matter which party is in charge of which branch of government, there are always opportunities to work together.”

In its attempt to secure a hearing from the new administration, Facebook is planning a series of initiatives that align with Mr Biden’s top priorities in government, insiders say. The company will expand its efforts to combat misinformation about the coronavirus pandemic, and is considering publishing a banner advertisement at the top of users’ news feeds encouraging them to take a vaccine once it is approved.

Such a move threatens a backlash from the majority of Americans, however, who say they are not convinced that a vaccine will be safe and are not sure they will receive one.

The company is also working on how to promote action on climate change, including a range of new stickers, buttons and other functions to encourage users to share content about the Paris climate agreement, which Mr Biden has promised to re-join.

Mr Biden will now have to decide whether to lend his weight to various Congressional efforts to regulate social media, including whether to follow through on his threat to try to repeal Section 230. And his pick to head the FTC will decide whether to push for Facebook — which bought Instagram and WhatsApp in 2012 and 2014 respectively — to be broken up altogether.

In Washington meanwhile Facebook plans to give a greater public role to Sir Nick, who has known Mr Biden since they were in parallel jobs in Washington and London from 2010 until 2015. Like Mr Biden, Sir Nick considers himself a political centrist who has attempted to move British politics away from its traditional left-right divide.

The pair have stayed in touch since 2015, jointly helping found the Transatlantic Commission on Election Integrity — an international organisation dedicated to fighting foreign interference in western democracies — and even recording an hour-long podcast together in 2018.

One senior employee at the company said: “A lot of the Democrats simply hate Facebook right now. We know Nick Clegg is not going to save us from that, but at least he will help us get a hearing.”

Another person said Sir Nick will probably play a similar role to that played in the last few years by Joel Kaplan, the veteran Republican operative who has spearheaded the company’s attempts to get close to the outgoing president Donald Trump.

READ  Weinstein’s lobbying for leniency is a tired trick

Many however warn that the company’s latest push to win friends on the left is likely to prove insufficient.

“But Biden’s team has been unsparing in their criticism of Facebook and I’m cautiously optimistic those relationships won’t stop the new administration from taking a hard line.”

Beyond noir: Nordic content of all shades is on its way to Netflix

Joan Bakewell: ‘The world is full of such interesting people’

The remarkable bounce back of New Zealand's magazines

Any way for siri/iphone announce message received when phone connected… –...