Home Autos Everyone Knows the First Auto Union Type-C, But no one Knows it...

1932 was a time right between wars. Technological advancements left over from the first World War spawned a lot of competition between giants like Auto Union and Daimler Benz

But all that is just history. Welcome to today, where wars are now waged within the mind, as it should be. From such a raging mind was born this Audi concept. From Moscow’s Burov Art, we are shown what an Auto Union Type-C of the 21st century should look like.

The original Type-C offered us a large and round front end with a smaller rear engine compartment, The Burov design is a switch on the classic design. In this concept you’ll see that the front is smaller than the back. This offers a more modern and cutting edge look, but should also work differently on the aerodynamics of the ride. 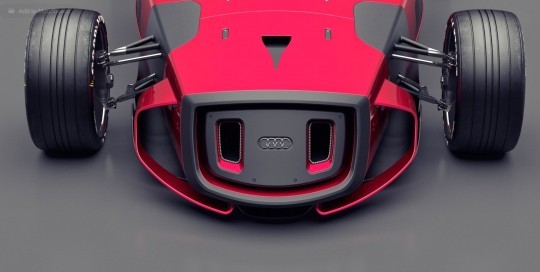 The initial prototype model for this car looks good even with just that gray skin. The overall shape of the body reminds me of my electric shaver. Even the front looks like you’ve got holes for a socket. But the only thing going into these holes is some air.

This is just one mean looking pig-nose air intake. The fins on the side give it a manta-ray feel, and the carbon fiber protective plate underneath furthers that appearance from the front all the way to the rear of the vehicle.

The “shaver” look, now that I think about it, is more of a modern-day roadster body. There are no details as to what it would be made of, but nowadays’ carbon fiber seems to be the favorite. And probably some aluminum alloy chassis to give it a lightweight yet strong design. If Burov Art holds true to the weight limitations announced in 1932, then this ride should top out at 1,650lbs (750kg). 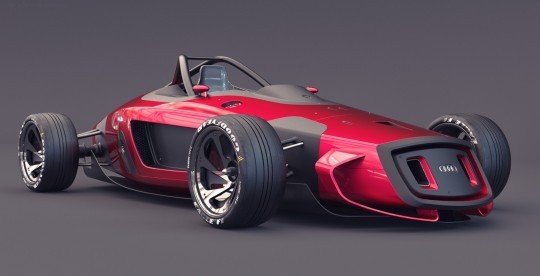 The driver cockpit is also reinforced with a racing roll cage. A carbon fiber racing seat further lowers the weight of the ride, albeit not in a very comfortable way. Just grab a pillow and prop it under your bottom. The racing harness will make sure you don’t go sliding around in your seat. Not that you could go very far, it does seem like a very tight fit with an even possible weight restriction. Side mirrors at the front of the cockpit let you see the world you’re leaving behind.

The rear of the roadster has a very BMW kidney grill look. I wonder if they had a sneak-peak or this is just the direction that things are moving in.

Unlike the classic roadster look, the wheels on this scimitar do not alternate in size, offering a look that wouldn’t be out of place on the streets of Monaco. 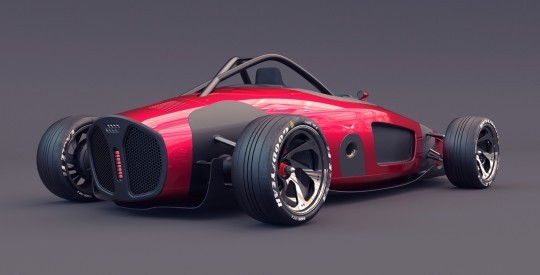 As far as the suspension goes, you can see it sticking out the sides of the body. Each back wheel is supported by four carbon fiber support struts and an axel. The brakes are enclosed in a carbon fiber shell reminiscent of drum brakes. The front wheels, suspension and steering are set up like your typical formula car, allowing the front to steer, while the back is dragged behind.

Wait a minute, that doesn’t make any sense. Of course it’s not dragged behind, it’s an RWD vehicle. Imagine taking corners in this thing. We don’t have any specs on speed so your imagination is the only true limit.