True wireless earbuds are all the rage, having adopted mass acceptance over the past year. Unfortunately, they are usually more expensive than their wired or wireless counterparts. Fortunately, there are a few companies that make affordable alternatives.

Our Enacfire E90 review looks at a pair of true wireless stereo earphones that promise great sound and battery life at an affordable price. Read on to see how they perform!

The Enacfire E90 True Wireless Stereo Earphones have the following features and specifications:

True wireless earbuds usually fall into two styles: completely in-ear or with a long stem. The Enacfire E90 True Wireless Stereo Earphones fall in between. While they have a stem, it is shorter and wider, so it doesn’t stick down as far outside your ear when worn.

White in colour, the bottom of each stem has a silver plate. At the bottom of this plate is the earphone mic and charging pins. The inside of the stem has an R or L to indicate which ear the earbud goes in. On the outside of the stem are an LED indicator light and a small grille, presumably for the noise cancelling. Above this grille is the multifunction touch surface.

The stem expands out into the main round bulbous earbud. As is typical, the speaker is at the very end and juts out a bit. The included ear tips slide around and fit snugly on the end of the earbud. Enacfire includes three sizes of ear tips, so you should get a good size fit.

The included case is rectangular in shape with rounded edges. It is roughly 2 1/2-inches wide by 2-inches in height and about 3/4-inch thick. The bottom of the case has a USB Type-C port for charging. The Enacfire logo is printed in grey on the front with four charging indicator LED lights above it. The lid opens above the LED lights. Once opened, you’ll see the familiar wireless earbud receptacles. These are marked R and L (and for once are on the correct sides), so you know which earbud goes for charging.

Like most other true wireless earbuds, the Enacfire E90 True Wireless Stereo Earphones are easy to use. The first time you use them, removing them from the case will enter pairing mode. Find ENACFIRE E90 in the Bluetooth list on your device and select it. Once you do, you should be paired.

The earbuds have touch-sensitive pads on the top of each one for various controls. Some controls are earbud specific.

During testing, I found the touchpads to be responsive 99% of the time, with the odd time having to tap again to get the desired result.

Finally, the earbuds can be used in single-mode by removing one earbud from the case and using just it. Two ENACFIRE E90 may show up in the Bluetooth device list on your phone when used in this mode. If you aren’t getting sound out of the single earbud, select the unconnected ENACFIRE E90 entry.

While affordable options are closing the gap with their more expensive counterparts, it can be hit and miss depending on the product. Out of the box, the Enacfire E90 True Wireless Stereo Earphones are loud, but sound quality really depends on the track you are listening to. Sometimes the bass is muddied and almost overpowering, especially at higher volumes. I like my bass, but about 70% of the time, tracks are definitely bass-heavy, almost too much so. Other times, the bass is practically non-existent. Using my test playlist (see below), I found that tracks sounded best when the earbuds were used at about 60% volume. Tracks like “Rosa Parks,” “bad guy,” and “Vroom Vroom” all were on the bass-heavy side. Other tracks like “Karma Police” and “Fast Car,” on the other hand, sounded a bit flat at times.

The Enacfire E90 True Wireless Stereo Earphones’ default sound quality is about 8.5/10. There is no Enacfire app to tweak the sound either. If your device has an equalizer, the sound can be leveled out and a bit more balanced with a bit of tweaking. However, at least in my case, this resulted in quite a volume loss, with 100% volume coming in more like 75% without the equalizer in use.

The Enacfire E90 offers CVC noise cancelling, which works well to keep outside sounds to a minimum while enjoying your music. Unfortunately, there is no way to toggle it on or off.

At the end of the day, the sound quality of the Enacfire E90 isn’t terrible, but if higher-end offerings have spoiled you, you may find them lacking. For those on a budget or younger users, these should be more than satisfactory — especially if you have a software equalizer on your smartphone.

The Enacfire E90 earbuds have pretty decent reception. I was able to walk around the house and get roughly 30 feet consistently before they started to cut out. Unlike some other more expensive offerings, I couldn’t hit every corner of the house with them, but they offered plenty of range to be satisfactory.

In today’s world, many people use their wireless earbuds to make and receive calls. During our test calls, the Enacfire E90 earbuds were satisfactory. I did have to speak up as the other party mentioned that I sounded a bit soft and far away when speaking at a normal volume.

READ  Onboarding delayed for newbies at IT firms - ETtech.com

Enacfire claims up to eight hours of battery life on a single charge, with five more full charges available from the included case. During our testing, the earbuds easily lasted through a typical workday with 7 to 8 hours of use. The case charged them up about 4 1/2 more times, bring the total battery life to around 40 hours before needing to plug the case in.

When depleted, the earbuds take about 1 1/2 hours to recharge in the case. When charging, the far left or right LEDs on the front of the case will be lit. Once the earbud is done charging, that light will go off. The case itself takes about 1 1/2 to 2 hours to charge. The LEDs on the front indicate the remaining charge left, with one being 25% and all four being 100% charged.

With an MSRP of US$59.99 on the Enacrfire website, the Enacfire E90 True Wireless Stereo Earphones are very affordably priced. As of this review’s writing, they are listed for $49.99 on Amazon with a 20% off coupon, which brings the price down to an extremely low $39.99.

While the sound quality isn’t as great as more expensive offerings, it is decent enough — especially considering the price point. If you can get them on sale, it’s pretty much an impulse purchase. 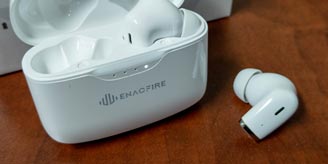 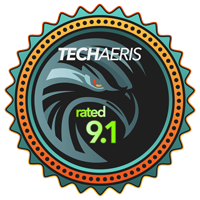 WD_Black AN1500 PCIe SSD review: Gen4 performance from a Gen3 drive but overkill for gamers – Firstpost

One of Quest’s Best-rated Experiences, ‘ALTDEUS: Beyond Chronos’ Launches on SteamVR

U of Kentucky breaks ground on high-tech startup facility – The...