According to John Hopkins University, the United States recorded nearly 90,000 cases of COVID-19 on Thursday, a record for the pandemic. The case count could climb much higher in the coming weeks, which would likely prompt state and local officials to introduce new restrictions that could reverse the economic recovery. The stock market didn’t react well to the surging virus on Friday, with the Dow Jones Industrial Average (DJINDICES:^DJI) down 1.4% at 1:20 p.m. EDT.

Shares of Apple (NASDAQ:AAPL) were dragging down the Dow on Friday after the company’s fiscal fourth-quarter report failed to impress investors. Honeywell (NYSE:HON) stock was down much less after its own earnings report beat estimates despite some heavy pandemic headwinds. 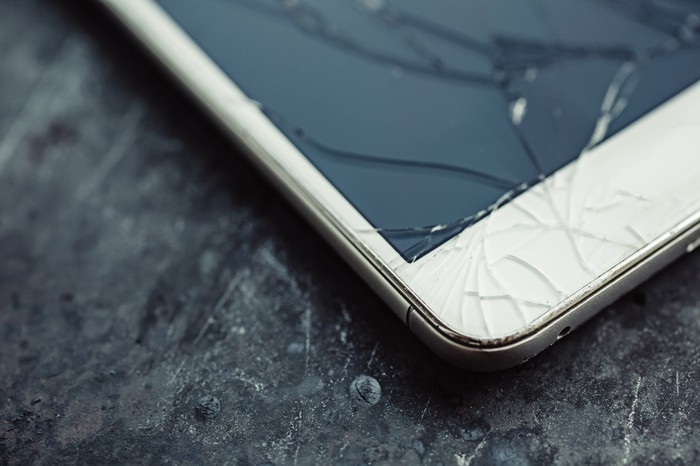 Tech giant Apple managed to beat analyst expectations for its fiscal fourth-quarter report, but the market wasn’t having it. A combination of tumbling iPhone sales, a steep drop in demand from China, and a lack of guidance sent the stock down 5.9% by early Friday afternoon.

That sales growth was driven by non-iPhone products and services. With the iPhone 12 launch delayed into Apple’s fiscal first quarter, the company saw iPhone revenue slump nearly 21%. Another factor possibly at play: Apple benefited from economic stimulus earlier this year, but with no new stimulus bill passed by Congress, consumers may now be wearier about upgrading a pricey gadget.

The iPhone delay also hurt sales in China, with revenue from the country down a whopping 29%. Solid growth for Mac computers, iPads, wearables, and services helped Apple overcome the iPhone and China sales slumps, but it wasn’t enough to please investors.

Apple decided to not issue any guidance for the fiscal first quarter due to uncertainty surrounding the pandemic. This means that investors are in the dark right now about Apple’s expectations for its iPhone 12 launch. The 5G-enabled iPhones could trigger a strong upgrade cycle, but a continuing pandemic, a very weak economy, and a lack of near-term stimulus will certainly hurt demand.

While Apple stock is still up about 48% so far this year, shares of the tech giant have now tumbled about 19% from their all-time high.

In a much less anticipated earnings report, one of the newest Dow components managed to put together some numbers that handily beat analyst expectations. Honeywell reported third-quarter revenue of $7.8 billion and adjusted earnings per share of $1.56, ahead of analyst estimates by $140 million and $0.07, respectively.

While Honeywell exceeded expectations, the pandemic is taking a harsh toll on the company. Total sales were down 14% year over year, driven largely by a 25% decline in aerospace sales. Adjusted EPS plunged 25% as weaker sales pushed down the bottom line. The company managed to cut costs by more than $450 million in the quarter, and it now expects to reduce costs by between $1.5 billion and $1.6 billion this year.

Unlike Apple, Honeywell is once again providing financial guidance. The company expects to deliver revenue between $8.2 billion and $8.5 billion in the fourth quarter, which represents an organic sales decline between 11% and 14%. Adjusted EPS is expected between $1.97 and $2.02, down just 2% to 4% compared to the prior-year period.

READ  The best apps for teachers and educators

Honeywell stock was down about 0.5% by early Friday afternoon, outperforming the market on a rough day for stocks. Shares of Honeywell are now down about 7.5% since the start of the year.

PSA: Don’t enable an Apple ID recovery key yet – or maybe ever – 9to5Mac

Part human, part machine: is Apple turning us all into cyborgs? – The Guardian

Ad-Supported Streamers Are Seeing Their Biggest Holiday Advertising Boost Ever

Microsoft's Surface Slim Pen is 25 percent off for Black Friday