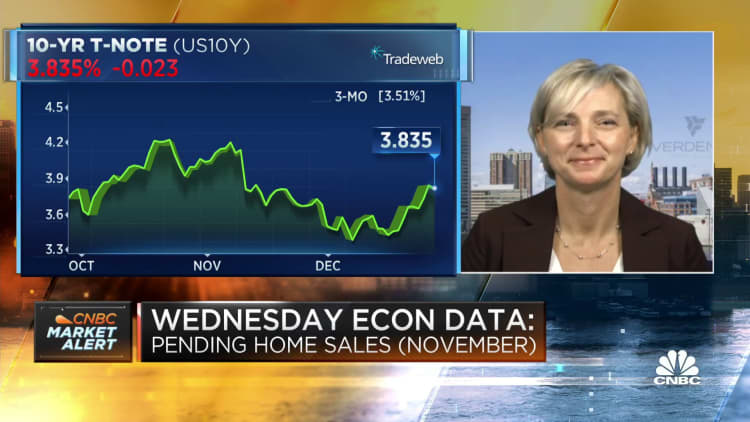 Stocks fell on Wednesday as traders looked to the end of a losing year and braced themselves for 2023.

Apple weighed heavily on the Dow as it broke a key level and fell to another 52-week low.

Energy was the biggest laggard in the S&P 500 as oil and natural gas prices slid. EQT, APA and Marathon Oil were among the notable losers in the index. Meanwhile, Southwest Airlines continued its slide as it canceled flights amid severe winter weather conditions. The shares fell more than 5%.

“Stocks finally clawed into the green in unison, but it didn’t hold,” said said Louis Navellier, founder and chief investment officer of growth investing firm Navellier & Associates. “On low volume, the market is trying its best to keep its head above water after a disappointing start to the official Santa Claus rally. It’s a bit of reversion to the mean as sectors hit hardest are seeing some bottom fishing.”

“The market appears to be exhausted, understandably, no longer expecting a large technical rally and just hoping to get to Friday afternoon without any further meaningful losses,” Navellier added. “Most of the year’s major uncertainties: China Covid, the war in Ukraine, tight energy supplies, and hawkish central banks, will be waiting for us on the other side.”

As the final week of trading winds down, the stock market is on track for its worst year since 2008. The Nasdaq has performed the worst of the three indexes, losing 34.72% this year as investors rotated out of growth stocks amid rising recession fears. The Dow and S&P 500 are on track to lose 9.53% and 20.62%, respectively.

Economic data releases on Wednesday included pending home sales, which slipped 4.0% in November on a monthly basis, according to the National Association of Realtors. The drop came as high mortgage rates gave prospective buyers cold feet. Economists polled by Dow Jones had expected a decline of 1.8%.

“There are clear signs that the economy is slowing, as demonstrated today by pending home sales falling to the second lowest level on record,” said Brian Levitt, global market strategist at Invesco. “Home sales are historically a good driver of economic activity as a new home sale supports many industries. At the same time rates continue to edge up as the Fed still signals a hawkish stance. In short, investors are hoping for the proverbial soft landing but challenges persist.”