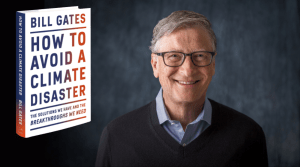 Microsoft founder and philanthropist Bill Gates brought a technology-infused optimism to the Chicago Humanities Festival panel in which he and actors Dax Shepard and Monica Padman, discussed Gates’ new book, How to Avoid a Climate Disaster.

The discussion began with a video. Gates speaks to the audience about both achievements and disasters, letting us know that he does not believe we’re quite doomed yet. The conversation that followed was decidedly friendly (and often complimentary), and thoroughly explored climate change and green technologies.

Gates’ approach to stopping our disaster-in-progress is built on a foundation of green technology and governmental regulations and tax credits. He’s careful to stipulate that we don’t want to get rid of things like air conditioning. Rather, we want to make them more environmentally friendly by changing sources of electricity, shoring up our grid, and making better tools. Similarly, he stresses the effects of climate change on human lives, from the danger of increasing heat waves (as well as winter storms, such as the storm that hit much of the South, leaving Texas and Mississippi without water and power). Gates notes that it is people and ecosystems that must be protected.

His idea for that protection is wide-ranging and optimistic, yet built on a solid foundation. He does not feel wind or solar power alone will be enough, and, at least in this conversation, did not mention hydropower at all. Nonetheless, he believes that between wind, solar, and nuclear, cleaner, safer electricity will be a reality. Gates notes that at this point the green tax—the price of cleaner, more environmentally friendly products—is too high for the average American, and definitely too high for many people in less well-off countries, but he makes it clear that he believes this tax will be reduced as governments and voters make climate change a priority. After all, the price of technology comes down, and Gates’ solutions are largely technology-based.

Gates’ vision is of a world where people across the globe neither freeze in the winter nor boil in the summer, and where food can still be grown along the equator and people won’t need to flee the effects of climate change. It is a strikingly hopeful vision, centered on things that are, fundamentally, possible, from green technology to voters pressuring politicians to invest in, and otherwise make, climate change and green technology a priority. Shepard, Padman, and Gates’ conversation is likewise an optimistic one, a discussion that never shies away from the dangers and the realities of climate change yet one that manages to leave its viewers with the feeling that the future needn’t be quite so bleak.

Learn more about Gates’ book at the publisher.

Edmunds: The most affordable new SUVs for 2021 – MyMotherLode.com