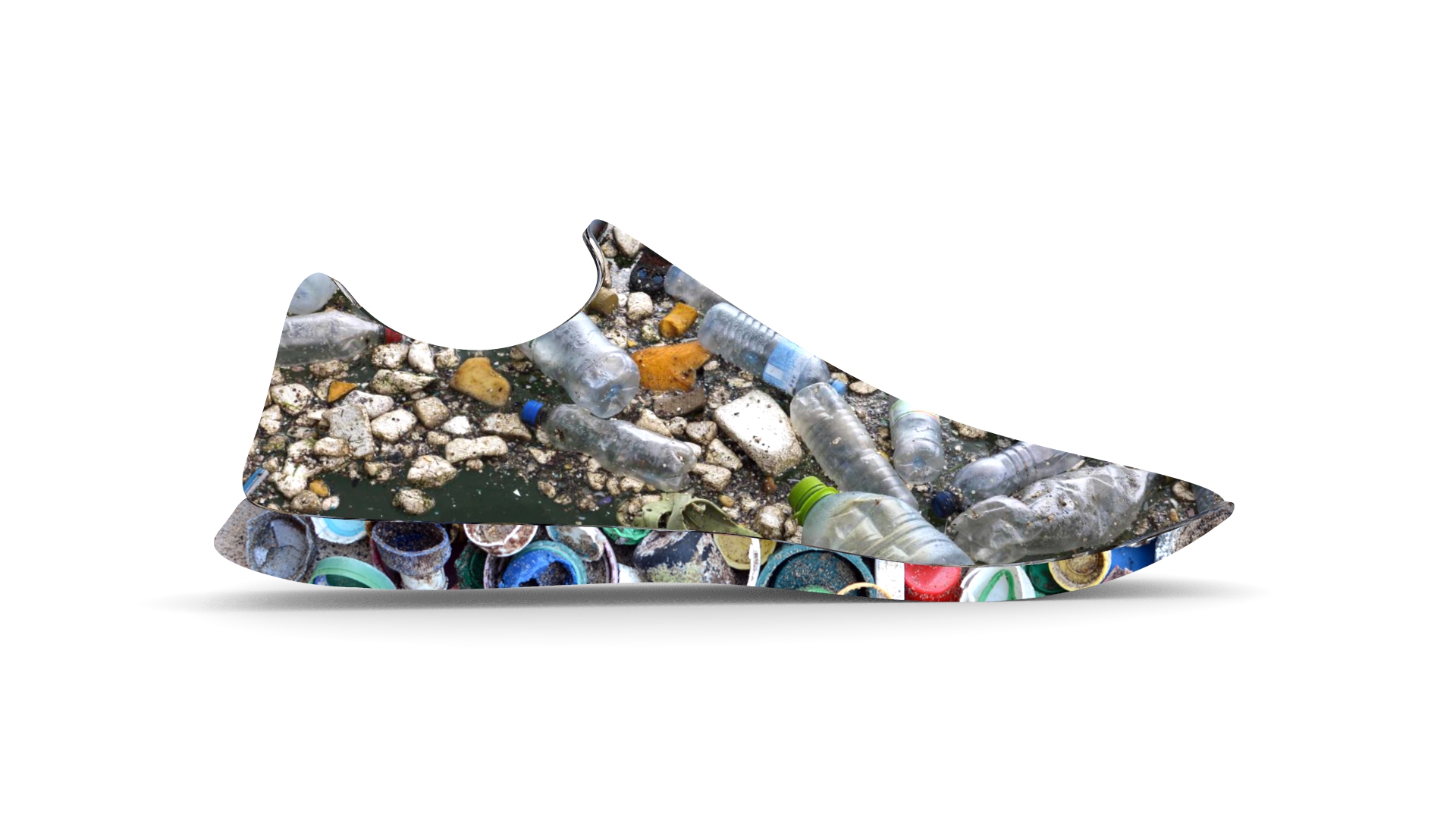 A North Carolina State University graduate student is designing and creating a pair of beach running shoes made from litter found on the coast.

Genevieve Gholizadeh, who is studying industrial design with a concentration in footwear design, was born and raised in Raleigh and has witnessed firsthand the growing marine debris problem during her family’s annual beach trips, she said in a recent interview.

Gholizadeh explained that she she grew up playing basketball and sneakers are a huge part of the basketball culture.

“People stand in line for hours to pay hundreds for a pair of shoes that they never wear,” she said, adding that she admired the shoes for their beauty but quickly discovered the ugly side of the footwear industry.

“The fashion industry is the second largest polluter in the world and shoes are responsible for one-fifth of the environmental impact. This pollution, which includes untreated toxic wastewater, microplastics and microfibers, is released directly into waterways, which lead to our oceans and end up contaminating not only humans but aquatic life,” she said. “This project allows me to combine my two biggest passions: shoe design and finding a solution to marine debris.”

She is able to move forward with the project through a Women in Sports Tech, or WiST, fellowship grant. Gholizadeh received one of the 15 summer WiST fellowships. The $5,000 grants were awarded to students to pursue summer projects in sports technology.

“The mission of Women in Sports Tech is to support women at all stages of their careers in the sports tech landscape. The WiST Fellowship Grants are our primary initiative helping us open the door to sports tech for young women looking to enter the space, learn more about available opportunities and otherwise compete in a male dominated industry,” Gretchen Reeves, executive director for WiST, told Coastal Review Online.

Gholizadeh writes in “From Shore To Shoes: Beach Runners From Coastal Waste,” her grant proposal, that by 2050, there could be more plastic than fish in the ocean. “Plastic pollution kills more than 100,000 marine creatures every year by entanglement or ingestion. If these animals survive ingesting plastic, toxic pollutants are transferred up the food chain and ingested by humans.”

READ  Oracle and TikTok struck a deal. What it is, none will say - The Herald Review

Additionally, using recycled materials instead of virgin materials in the production of the shoes will reduce the amount of carbon emissions and net waste resulting from the manufacturing phase of a shoe. 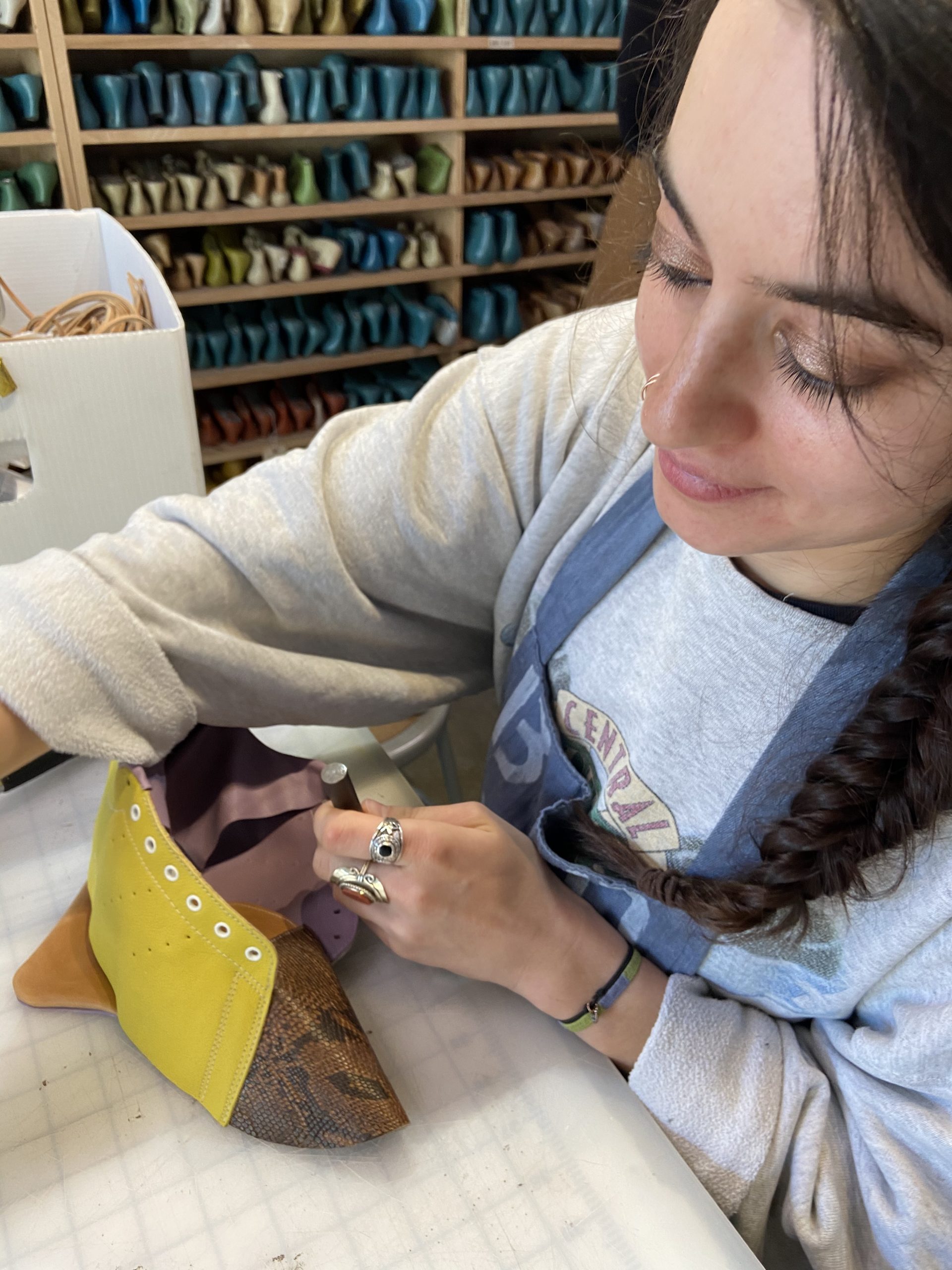 Genevieve Gholizadeh in a shoe class at the Brooklyn Shoe Space. Photo: Contributed

She went on to write that the creation of the shoe “will decrease waste not only in coastal areas, but (also) in the manufacturing process of shoes. My shoes will inspire runners to visit beaches, keep them clean, and appreciate coastal regions.”

Gholizadeh had her first experience in shoe-making at a one-day intensive SneakerKit shoe class, participated in a shoe class at the Brooklyn Shoe Space, apprenticed with a shoe cobbler and spent three weeks touring shoe factories in Thailand and Vietnam.

Gholizadeh’s project adviser is Solene Roure, a French design consultant based in London, England, who specializes in footwear and accessory creation.

“The future of design, including fashion is dependent on the circular economy: eliminating waste and the continual use of resources and creating a positive, closed loop system,” Roure said. “Conservation is one of the key elements of circularity. It is so evident that conservation of oceans, forests and earth resources is our primary concern. From a design standpoint, it’s a chance to be more creative, to break the old fashion system which is toxic, both literally and figuratively. The easy way is rarely the best way.

“So let’s roll up our sleeves and create the product of the future with a sustainable mindset.”

The final goal with the project is to create a marketable pair of beach performance running shoes made of materials found on the North Carolina coast, Gholizadeh explained in an interview.

“This initial prototype will decrease waste in coastal areas and will ultimately bring awareness to the growing marine debris problem. My hope is that my shoes will inspire runners to visit beaches, keep them clean, and appreciate coastal regions.”

The project has been divided into four phases: ideation, on-site research, digital design and prototyping, and fabrication and physical modeling.

Each phase is characterized by specific goals, Gholizadeh explained. The first phase focuses on consumer surveys and synthesizing the collected data.

Gholizadeh created an online survey as part of the first phase, which she is still working in, to collect input from anyone who would like to share insight about beach running, marine debris or any related topic.

The second phase concentrates on determining readily available materials on the coast and interviewing those at relevant processing sites and design studios.

The third phase includes creating a digital and a 3D-printed prototype of the shoe based on findings and during the fourth phase materials from the coast will be collected and used to construct a physical and wearable model of the shoe.

“Thankfully, I programmed a contingency plan into my project in case the pandemic had the effect that it has had. The factory visits and in-person interviews that I had planned have now been moved to the virtual format, which is different than I had initially anticipated. Nevertheless, I am extremely lucky to still have the resources and tools to execute my project,” she said.

Gholizadeh explained that WiST is “the leading organization to bring together companies, their executives, young professionals, and students who share a passion for innovative technologies that impact success throughout the business of sport.” “They’re committed to changing the ratio of women in the sports technology industry and use the hashtag, #ChangeTheRatio.”

Gholizadeh said she found out about the WiST fellowship through Tsai Lu Liu, professor and department head of graphic design and industrial design at N.C. State, who forwarded Gholizadeh an email from WiST advertising for their 2020 fellowship opportunity and said, “This is for you, Genevieve!”

“My professors do a really good job of finding out what the students are passionate about and creating a pipeline of opportunities for us,” Gholizadeh explained, adding that for example, she said she made it abundantly clear that she is interested in performance footwear design, “So my professors send relevant opportunities my way.”

Reeves with WiST said that Gholizadeh’s project was selected for a variety of reasons.

“It is a perfect example of the application of tech in a sports context: development of a material using multiple technology steps (materials development to biometrics to production) for application in a running shoe (sports),” Reeves wrote in an email to Coastal Review Online. “It also demonstrated a honed eye for design and presentation, both of which are critical aspects in accomplishing and communicating successful projects.”

She added that the focus for WiST is not environmental per se, but each individual in the organization works on multiple levels to make the world a better, more equitable place and conscientious treatment of the planet is a mainstay for everyone.

“What better way to showcase exemplary behavior than to collect plastic waste from the ocean and re-use it to address footwear needs of beachgoers?,” Reeves said. Plus, “A large number of our team also has strong ties to North Carolina, so the addition of Outer Banks to her project specs was also a positive influence. That said, even without the NC angle, her project proposal very ably dominated the pool of top applicants.”

Reeves said that diversity and inclusion are at the heart of our work which is accomplished by tireless volunteers supported by a part time contractor.

“We hope that projects like Genevieve’s will help raise awareness for the types of opportunities available in sports tech in order to draw more women into the mix. Diverse teams outperform non-diverse teams. We are working to #ChangeTheRatio to increase diversity in the industry which marries technology to the practice and love of sport,” said Reeves.

It costs about $500 to produce this and all other stories on CRO. You can help pay some of the cost by sponsoring a day on CRO for as little as $100 or by donating any amount you’re comfortable with. All sponsorships and donations are tax-deductible.