TribLIVE’s Daily and Weekly email newsletters deliver the news you want and information you need, right to your inbox.

Pat Beyer says she’s heard many times over the years that ghosts inhabit the Apple Hill Playhouse in Delmont.

After all, the structure has been around since Civil War times, starting out as a barn before its reincarnation as a theater with a long string of owners.

She thinks those apparitions might actually have been the hallucinations of overworked and overtired actors and stage crew, working night and day to make sure the show always went on.

But as Beyer reckons with closing the theater that she’s owned for 38 years, she knows that the spirit of those past players and productions will live on in the hearts of all involved.

“We did have some lively times here,” she says. “Thinking about it brings back so many memories, some funny, some wonderful — and not just the acting, but anything and everything. We made so many wonderful and lasting friendships here.”

Covid-19 restrictions put paid to the theater’s 2020 season, both mainstage productions mounted by the resident Orchard Performing Arts Company and Johnny Appleseed Children’s Theater productions. The shutdown forced Beyer to make the difficult decision to close the venue and eventually sell the property.

Along with her age and health, Beyer cites the uncertainties of when performances will be able to resume and under what conditions. The rustic playhouse itself is expensive to maintain and eventually will need a new roof.

It originally housed mules that toiled in a nearby mine, she says, so the stage and backstage, seating and storage areas, electrical service, plumbing and everything else have been “make it work” projects throughout the years.

But somehow it all has worked, and Apple Hill has endured where other area theater groups and summer “straw hat” theaters closed — including New Kensington Civic Theatre, Sherwood Forest Theatre in Murrysville and Valley Players of Ligonier.

“The barn is such an iconic part of Delmont history. It’s really been the centerpiece of the community,” says Tina Lepidi-Stewart, OPAC artistic director who’s also been a costumer and assistant business manager.

“How the hell did we do all this? We had people who were passionate about the theater,” Beyer says.

That included her late husband, Dr. Barney Beyer; her sisters, Marge Kerr and Joyce Akins; Kerr’s husband Chip and their daughters, and her late parents, Andy and Marge Krehlik.

Actors, directors, set designers and builders, staff, volunteers and audiences became family over the years, too. 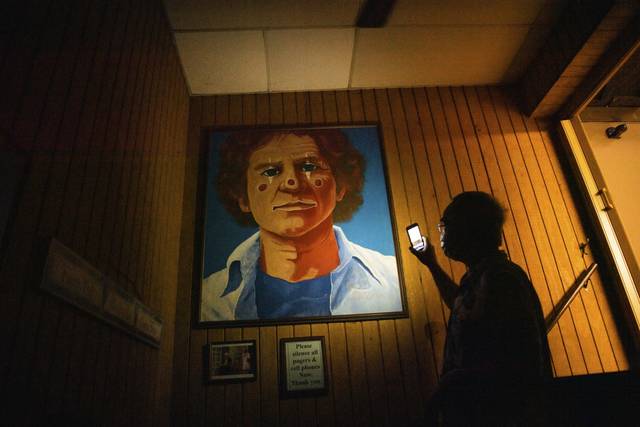 Chip Kerr, a 55-year veteran of Apple Hill Playhouse and other Pittsburgh-area theaters, illuminates a self-portrait of Bill Midas, a former actor, painter and tech at Apple Hill in Delmont.

“I grew up close to the playhouse and I cherish those family trips we took there. My mom always took me to the Johnny Appleseed shows, too,” says Jamie Lee Korns, a member of Murrysville council. “They hired me to be house manager when I was in high school. I didn’t know much about theater at all, but they had faith in me to hire me.

“I met hundreds of lifelong friends there, people I’d never have met otherwise,” says Ron Ferrara of Vandergrift. Since 1999, he says, “I’ve never missed a year when I’ve either directed or acted in a production, usually two a year. I have so many marvelous memories.”

One landmark moment for Ferrara came in 2001.

“We had a show the same week as 9/11. I called off rehearsal and the cast got together to decide what to do,” he says. “We decided to do the show and see what happens. We didn’t know if anyone would come. That night, the line outside went out to the parking lot.

“Before the show started, we put our arms together with the audience and sang ‘Amazing Grace.’ Every 9/11, I still recall that,” he says.

“There’s something special about getting a little dressed up and going out, hearing the laughter and mingling with the people,” says Apple Hill veteran actor Shirley Ratner of Greensburg, who paired with Chip Kerr in numerous productions over decades. “(The closing) is a loss not only to the people involved, but to the people who loved to come to the barn on a summer evening and see some good theater and not pay a fortune.”

Fortunately, Apple Hill has built a legacy that ripples out across Westmoreland County and even throughout the country.

“Without Apple Hill, there would be no Westmoreland Night of the Stars,” says John Noble, founder of the annual showcase of area high school musicals. A mediation attorney by trade, Noble also is an actor and portrays “Almost Sinatra” with the Murphy’s Music Center Big Band.

“Just like myself, many a young actor got their start at Apple Hill. It’s the birthplace of many amateur, if not professional, careers,” he says. “They took a chance on an actor who never did a show.”

Encouraged by his brother-in-law to try out for a different play in 1991, Noble found himself cast as Capt. Georg von Trapp in “The Sound of Music” when the former lead was precipitously fired.

“Marge (Kerr) said, ‘You’re the right age, I like your shoulders and you’re a lawyer — I think I can work with you,’” he says. “I was as green as the grass, but ‘Sound of Music” introduced me to the kids and musical theater, and one thing led to another — decades of memories, decades of joy.”

His late sister, Chris Orosz, was on the Apple Hill board at the time, and she convinced their mother to let him audition for “The Wizard of Oz.”

“I got cast as the Cowardly Lion,” Marino says. “I jumped out and made people react and laugh, and that’s just what I was looking for. It provided me with what we try to provide the kids (at Stage Right).”

Apple Hill veterans who have made national names for themselves include Matthew Stocke, a Broadway and television actor; actor/producer/composer/singer Manu Narayan; and Brad Dell, director of theater at Iowa State University.

In its heyday, the self-described “best little theater in the country” drew Pittsburgh theater patrons looking to escape the heat of the city in what were then “very rural” surroundings, Beyer says.

“He would come out reluctantly and always mention how he had to stop for the pig crossing,” she says.

Packed to the rafters with costumes, props and memories, the playhouse will remain in Beyer’s possession for a while, as she deals its voluminous contents. 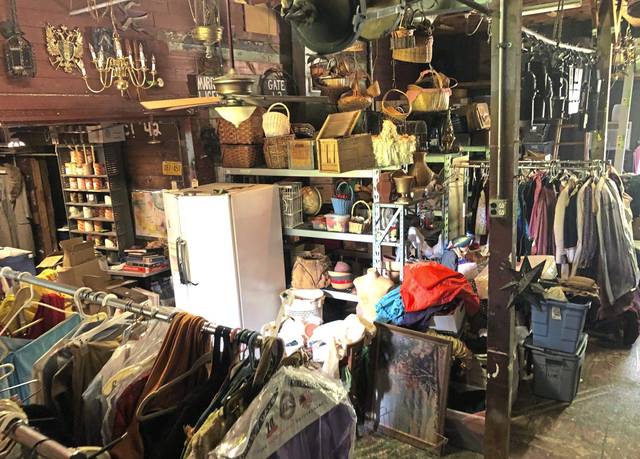 Decades’ worth of costumes and props are stored backstage at Apple Hill Playhouse in Delmont.

“It was always sad between the seasons to see the place with no life. To see it come to life every summer was a wonderful thing,” Chip Kerr says. “Now we’ll see what’s sold, salvaged or thrown away. There’s still an enormous amount of work to be done.”

Orchard Performing Arts Company board members hope to find a new permanent home for the troupe. In the meantime, Lepidi-Stewart says, OPAC plans to host a drag queen bingo fundraiser Nov. 13 and “A Taffeta Christmas” production Nov. 19-22, both at The Lamplighter in Delmont.

When she locks the doors for the final time, Beyer says she’ll spend more time reading and, if possible, traveling. Unfortunately, she says, it’s probably the end of the line for the storied old barn — a sad reality that Ferrara echoes.

“I don’t thing anyone’s going to buy that place, because it would need so much work to be raised to whatever the standards are going to be,” he says. “I think the old barn’s going to be razed pretty soon, and that’s going to be a very sad day.”

TribLIVE’s Daily and Weekly email newsletters deliver the news you want and information you need, right to your inbox.

'Law unto themselves': the Australian battle to curb Facebook and Twitter's power

He went from a childhood in Anchorage to alt-right fame. Now, the social media personality known as Baked Alaska been arrested for storming the...

How one hacker's push to secure the internet became a crucial part of Mac, Linux, and Windows operating systems – Yahoo News