I never understood why anyone would get a wireless keyboard for desktop use until this week. As a hardware reviewer, I’m in a never-ending battle to keep the wires on my desk neat, tidy, and as hidden as possible. It’s surprising, then, that I had not considered that a wireless keyboard would be the easiest way to solve this problem. It seems so blindingly obvious in hindsight. Don’t like wires? How about simply not having any? Genius. 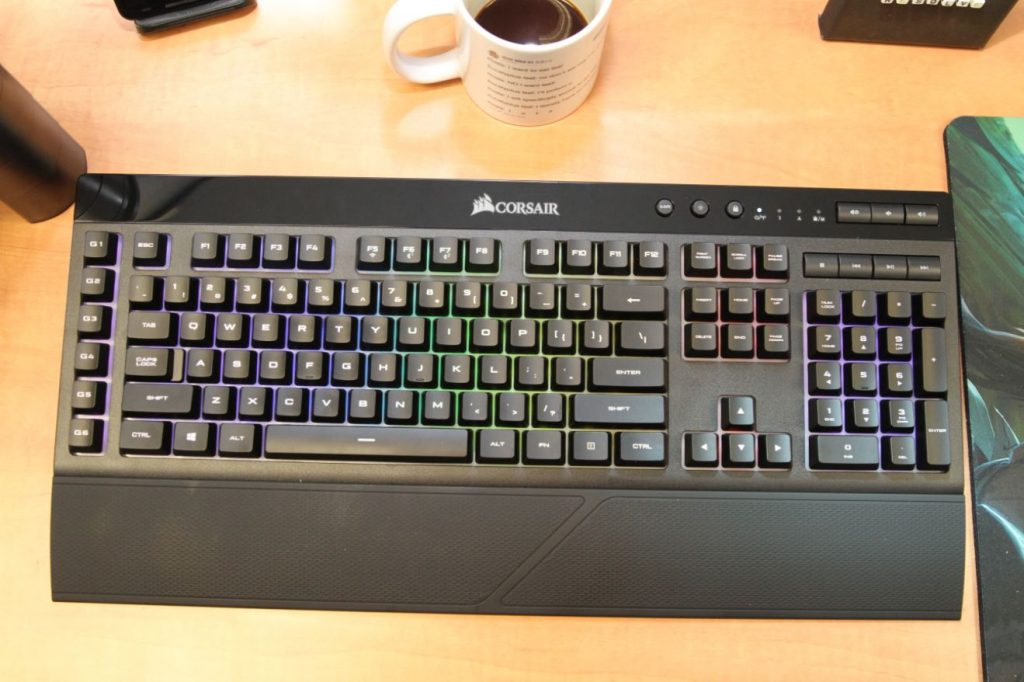 The K57 divides its top-casing between reflective, matte, and wrist rest, and the result is a gorgeous set of parallel lines that gives the desktop keyboard an elegant feel. Combined with the low-profile switches and soft keycaps, it has a subtlety in its look that intentionally departs from the loud brashness that underscores most modern keyboard design.

The rounded multimedia switches in the top right above the tenkey is standard Corsair fare, and it works here too. The RGB backlighting is low-key (lol) enough that it doesn’t scream into the void – even at maximum brightness, the glow is chill, and relaxing. It adds mood, rather than flair. That said, there’s a reason wireless devices shy away from RGB – it’s an incredible battery sink, and using the RGB drops the K57’s battery life from an impressive 175 hours to a work-week of 35 hours. 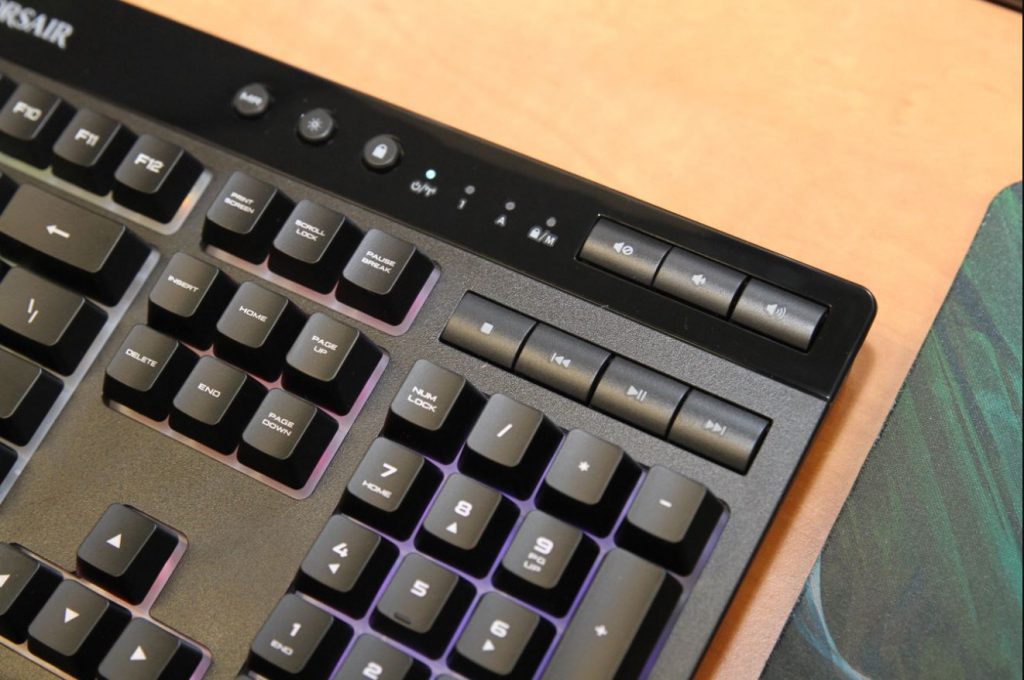 In addition to the 2.4ghz receiver, the K57 can also connect with Bluetooth, which is great for tablet usage, but the battery life is even worse – 30 hours with lighting on, or 50 hours with lighting off. I’m not really sure why there’s such a similarity with lighting on, but such a difference with it off, but I’m guessing if you’re using this with a tablet, you’ll have to charge it anyway, so it’s not such a big deal. Of course, you can always forego the wireless altogether and connect via USB, like any other keyboard. You’ll need to connect occasionally to charge, of course, so it’s worth keeping the cable around.

It’s not without its other weaknesses either. The K57 isn’t mechanical, and uses old-fashioned rubber-dome switches, which have a predictably mushy feel, and lack both the satisfying click feeling and the light touch that a mechanical switch provides. If it weren’t wireless, I’d be expecting more for my $100, but it is, and it’s absolutely one of the cheapest options available for everything that it offers.

The positioning of the macro keys is a little disconcerting, although if you’re the kind of person who uses macro keys, they’re fine. I found my hand constantly tries to orient to the edge of the keyboard by dragging the left-most key, which meant I would always hit G1 when I meant to hit the Escape key. 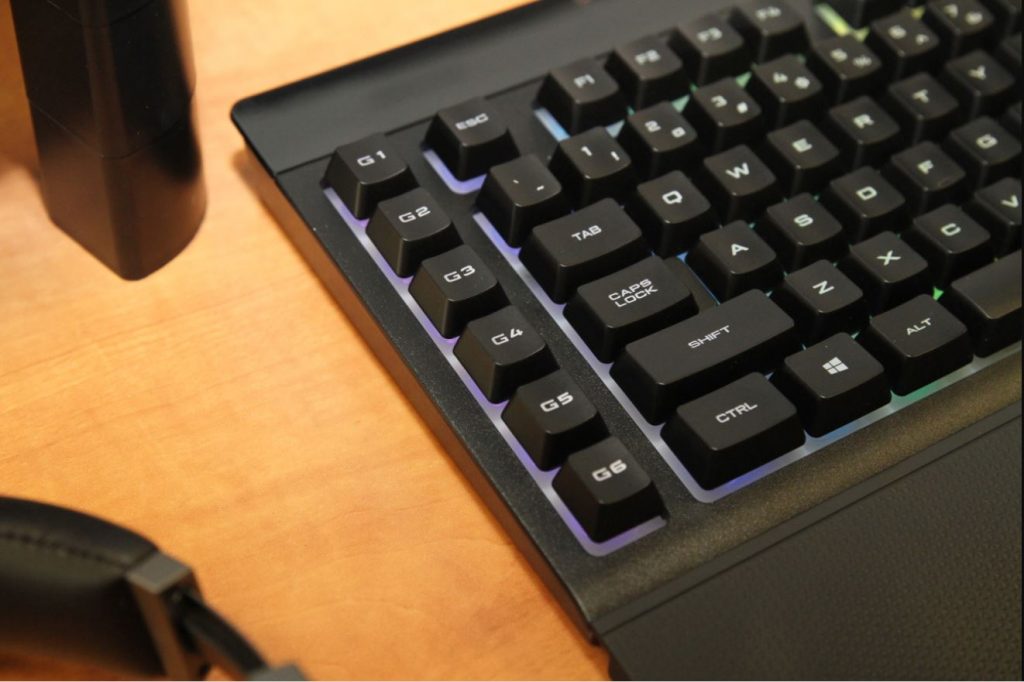 The Corsair iCue software that’s used to configure the K57 remains, as always, not great. The organization and layout is just not quite there. It splits “configuration” functions from “settings” functions whilst not clearly delineating which belongs in each. It took a while to get used to which options were on which screen, and I would forget nearly every time I tried to change something which screen it was on. 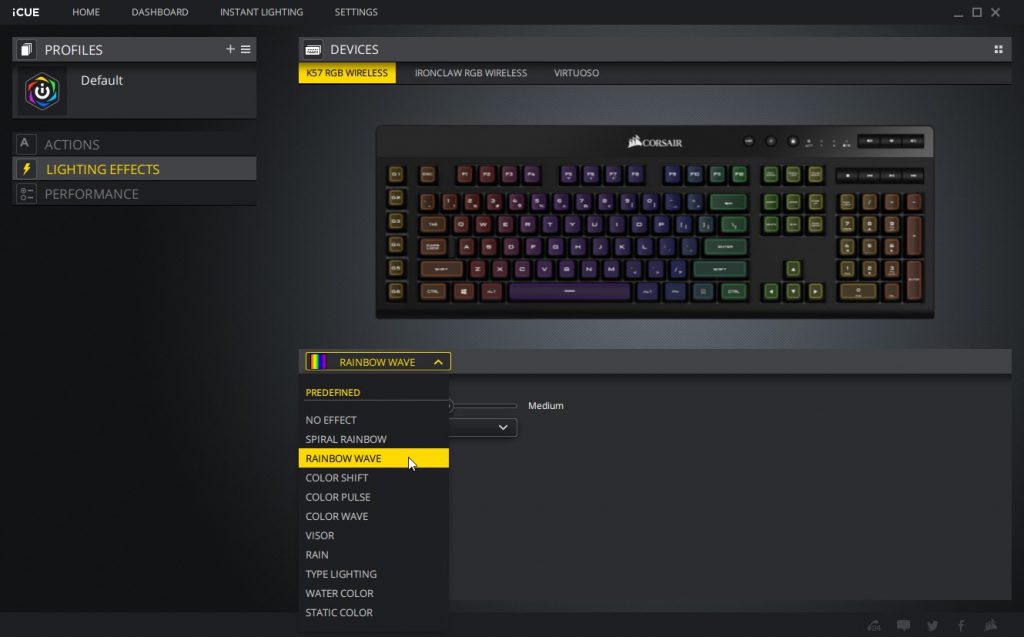 It was easy enough to set up some macros, assign them to the keys, and change the rainbow wave glow between a variety of presets, and make my own lighting designs, so I can’t really complain about it too much since I didn’t really need to spend too much time in it.

Overall, the K57 was better than I expected. It looks great, feels alright, but does so at an extremely affordable price for the features.

There are two reasons to get a wireless keyboard:

Corsair makes the K63 and K83 for the first group of people, but they’re much more expensive, so if you’re in the second group, K57 Wireless is firmly the pick for you.

Huge meteorite did not play a part in demise of dinosaurs,...