The Corsair Ironclaw RGB Wireless is an impressive mouse, and one of the first to really shake up the expected layout in a way that produces a meaningful difference in how to use it.

One of my main complaints about mice with a lot of macro buttons is that they tend to all rely on a lot of thumb usage – the Razer Naga, for example, and its array of thumb buttons, requires significant work to get used to and use effectively.

But the Ironclaw’s schtick is a more low-key way to get more buttons into your grip, without having to navigate a keypad worth of buttons. With an additional two buttons on the left side of the left-click, and an additional button above the regular thumb buttons, I was surprised how quickly my hands adapted to these extra options. 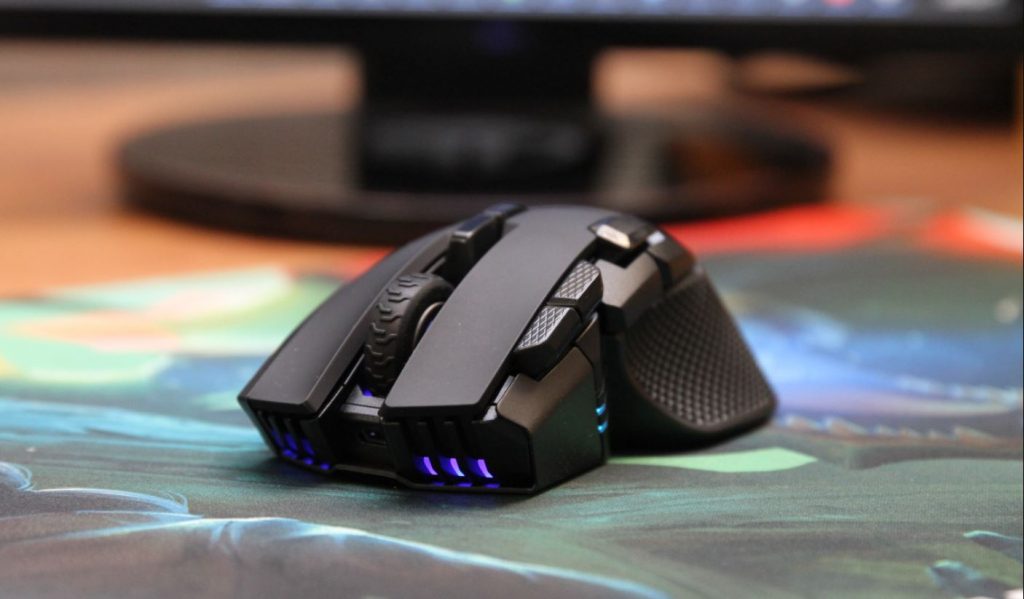 After a few minutes in the iCue software I was able to map these to cut, copy, and paste, and was actually using it in my day to day workflow. Transitioning in-game was simple, too – in League of Legends, being able to drop wards and use item actives with my mouse hand made mechanics that used to be more intense on the left hand much more easy to achieve. Kiting and ward-hops were smooth, and before I knew it, I was pulling off flashy plays with my new layout. Being able to hit macro keys with my main finger is quite literally a game-changer.

While it’s not perfect, the rest of the mouse is pretty great. All of the buttons can be pressed with almost no force, with the exception of middle click, which presents an odd amount of resistance. The shape of the body is obviously designed for a palm grip, but is perfectly usable in a claw or finger grip. The scroll wheel has a really interesting surface to it, and actuating 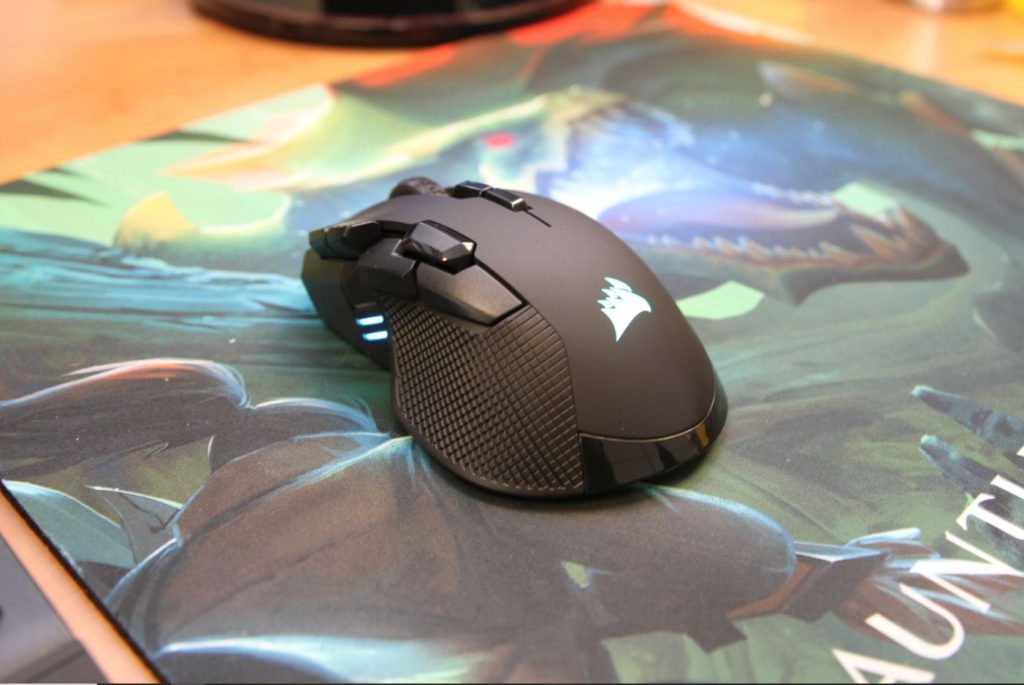 Connecting with the 2.4ghz wireless receiver will get you the best performance, but Bluetooth will get better battery life – if you’re buying this though, you’re probably in it for gaming, so best to stick to 2.4ghz. When the battery runs low, which it will after 3 – 5 days, you can just plug it in with the included micro-USB cable, and you’re back online. The internal battery isn’t swappable, so you’re just stuck on the cable until it recharges.

I did find the 2.4ghz struggled with multiple other Corsair receivers around, though. If I changed mouse profiles, my Virtuoso headset disconnected briefly, and occasionally the mouse just stopped working. I wasn’t able to figure out how to remap all three of them to use the same receiver the way the Logitech wireless receivers do, and chose to just deal with it when the interference popped up. If I were going to keep them, I would have tried harder to muscle through the software difficulties. This, as usual, comes back to the weakness of the iCue software, which remains confusing and difficult to use. 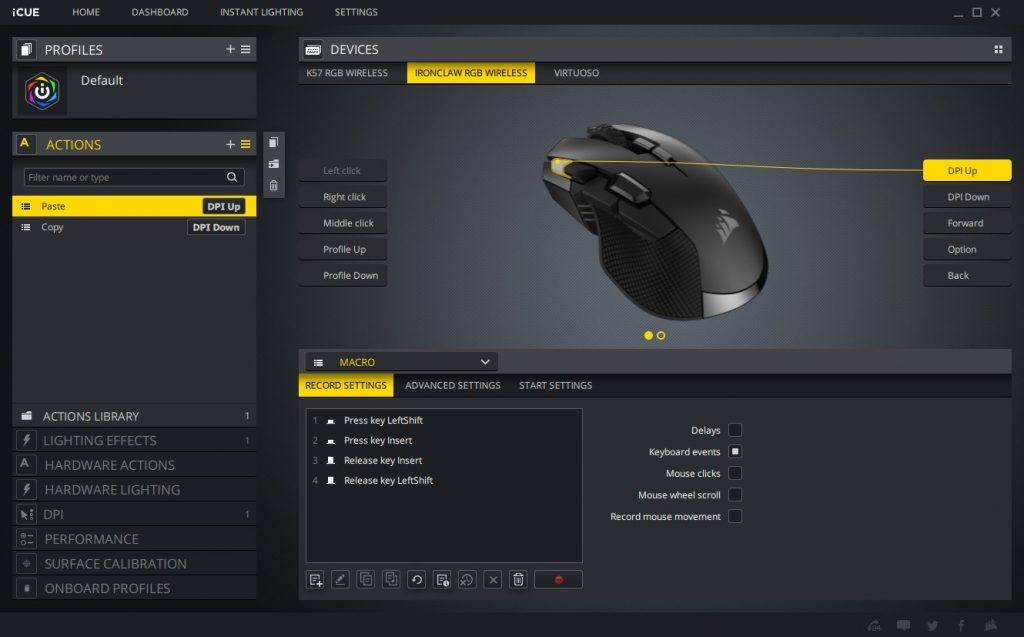 There’s no way to see the amount of battery the Ironclaw has left without going into several layers of settings, and figuring out how to assign macros was more difficult than it needed to be. It’s not immediately clear how to actually do the assignments, and it’s very easy to accidentally undo them.

The usual options exist, of course – configuring polling rates, DPI settings, calibrating it to your mouse part, and setting up the lighting.

I haven’t liked a palm-grip mouse for some time, and I suspect the palm-grip was what made such a heavy mouse (130g) feel good. Ordinarily I’d never have been able to use something this heavy without discomfort, but even with my wrists being sensitive to mouse weight, the Ironclaw didn’t present a problem. Usually 130g would be a dealbreaker for me, so the fact that it wasn’t means the rest of it was very good.

Unfortunately, the biggest issue with the Ironclaw isn’t anything to do with the mouse itself, and rests entirely with the configuration software. iCue remains the singular weak spot in Corsair’s gaming peripheral lineup, and while I hope for some UX updates soon, I’m not holding out for it. It’s considerably better than it was, but still unnecessarily difficult.

The Corsair Ironclaw RGB Wireless mouse is great, and it’s unique layout makes it worth trying. If you’re in the market for a wireless mouse, and don’t mind a bit of heft to your peripherals, it should definitely be on the list.

Airowater Dewpoint Water Generator Review: Beats a wa.. purifier, but not a drinking water fix for everybody – Firstpost

DxOMark tested the camera of the OnePlus Nord smartphone – FREE...

Save up to 40% on Beats Powerbeats Pro and Solo3 headphones