The risk of dying from coronavirus increases significantly depending on your age, with those over 65 over 18,000 times more likely to die than those under 20.

Epidemiologists from Johns Hopkins Bloomberg School of Public Health studied data from Geneva, Switzerland to calculate the likelihood of dying from Covid-19.

For those aged 10 to 20 the risk of dying from a coronavirus infection is three in a million but for those over 65 it goes up to about 60,000 in a million, figures show.

The team say that as Geneva has an ‘effective health care system’ that was able to cope with the surge in demand from Covid-19 their figures are a ‘best care scenario’.

They said their findings suggest doctors, specialists and governments should work on an age specific approach to treating the virus and its spread. 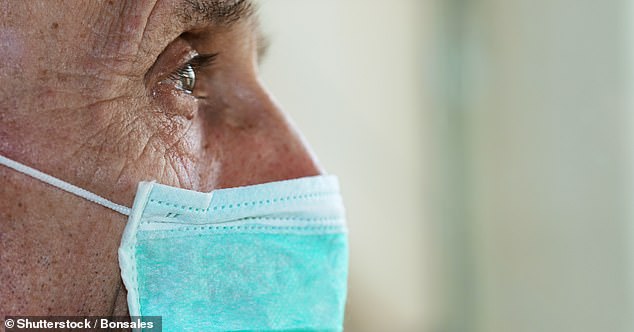 For those aged 10 to 20 the risk of dying from a coronavirus infection is three in a million but for those over 65 it goes up to about 60,000 in a million, figures show. Stock image

The spike in the risk of death for those aged 65 and above is staggering, researchers working on the Geneva study explained.

It goes from a 0.14 per cent risk of death for people aged 50-64 who have been diagnosed with coronavirus to 5.6 per cent for those aged over 65.

To put this into a wider context, the average risk of death for someone who has been diagnosed with Covid-19 is 0.64 per cent, the authors explained.

Johns Hopkins researchers, with support from University of Geneva looked at the infection fatality risk (IFR) – an average number of deaths per infection.

READ  Red squirrel and woodpecker argue over NUTS in a tree

This measure is used globally and is key to characterising the severity of infection across the population and for specific demographic groups.

To date, few empirical estimates of the IFR for SARS-CoV-2 have been published owing to challenges in measuring infection rates, the team explained.

‘Outside of closed, closely observed populations where infection rates can be monitored through viral surveillance, we must rely on indirect measures of infection, such as antibodies,’ according to the study authors.

To create the IFR rates in this study they used representative seroprevalence – that is the level of the virus in the population – studies combined with death counts.

‘We inferred age-stratified IFRs by linking the observed number of deaths to the estimated number of infected individuals from each group,’ they explained.

A lot of the deaths in Geneva happened in long-term care facilities, according to Andrew Azman from the research team.

He said this may have had an influence over estimates of age-specific death risk and so the data used in the study may not be representative of the wider population.

‘Our estimates of the age-specific infection fatality risk from Geneva are likely on the lower side of what we may expect globally given that the health system was able to cope with the influx of COVID-19 patients with planned surge capacity,’ he said. 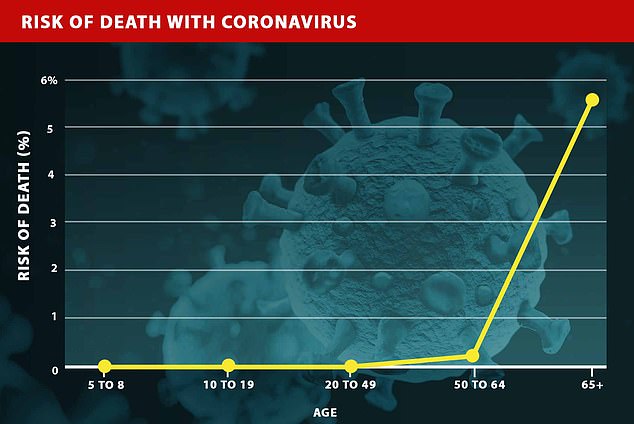 The spike in the risk of death for those aged 65 and above is staggering, researchers working on the Geneva study explained

Of the 286 reported deaths caused by SARS-CoV-2, the youngest person to die was 31 years old, the authors found during their study.

OVER 65s FACE THE GREATEST RISK OF DEATH FROM CORONAVIRUS

The figures from Geneva are similar to the risk of death from coronavirus infection for England, although the specific data isn’t entirely compatible.

‘Estimates of the IFR are key to understanding the true pandemic burden and for comparing different risk-reduction strategies,’ the study authors wrote.

‘The IFR is not solely determined by host and pathogen biology, but also by the capacity of health systems to treat severe cases.’

The team said that despite Geneva having the highest per-capita Covid-19 infect rate in Switzerland, its health system was able to cope with the intensive care peak.

It did this ‘while maintaining care quality standards’, the team explained.

‘As such, our IFR estimates can be seen as a best-case scenario with respect to health system capacity.

‘Our results reveal that population-wide estimates of IFR mask great heterogeneity by age and point towards the importance of age-targeted interventions to reduce exposures among those at highest risk of death.’

Details have the study have been published in the Lancet.

Animals have emotions and moods just like humans do, breakthrough study suggests

This Thanksgiving bundles for the Surface Pro 7 starts at just...