The Gulf Stream is ‘dangerously close to tipping point’: Ocean current is at its weakest for over 1,000 YEARS due to climate change and could plunge Europe into a deep freeze

Climate change has weakened the ocean current which drives the Gulf Stream to its lowest ebb for more than 1,000 years.

Known formally as the Atlantic Meridional Overturning Circulation (AMOC), it is the driving force which brings warm water from the Gulf of Mexico up to the UK.

It is a complex system that is responsible for mild winters in Western Europe and also influences the level of rainfall.

Analysis of its strength over time has revealed an unprecedented slowing over the last century, likely linked to soaring greenhouse gas emissions.

Experts warn that by the end of the century it could be so weak it reaches a tipping point which would result in devastating weather conditions across the world. 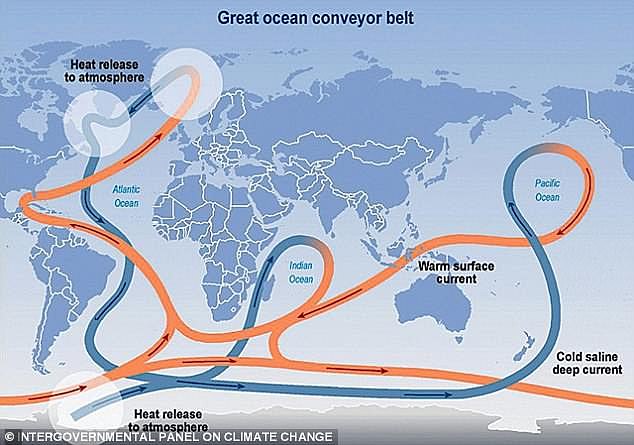 The Atlantic Meridional Overturning Circulation (AMOC) is the driving force which brings warm water from the Gulf of Mexico up to the UK. It is a complex system which is responsible for mild winters in Western Europe and it also influences the level of rainfall

WHY ARE OCEAN CURRENTS SO IMPORTANT?

Ocean currents play a critical role in regulating the planet.

Slower circulation in the North Atlantic can yield profound change on both the North American and European climate but also on the African and Asian summer monsoon rainfall.

This transfer of heat and energy not only has direct influence on climate over Europe and North American but can impact the African and Asian monsoon system through its effect on sea surface temperature, hydrological cycle, atmospheric circulation and variation in the intertropical convergence zone.

Direct data from the AMOC is hard to obtain so researchers collected information from a variety of proxy sources dating back around 1,600 years.

It backs up previous findings from the same team which found in 2018 that the ocean current has slowed by 15 per cent since the mid-20th century.

The new study puts this figure into stark perspective by comparing its meandering pace with that of the last millenium and a half.

Until the 1800s, it was relatively stable but the current declined after the so-called ‘Little Ice Age’ ended in 1850.

This was likely not due to human impact as the Industrial Revolution had yet to reach full tilt.

But by the 1950s the AMOC had slowed severely as huge amounts of pollution disrupted its formation.

Increased rainfall and enhanced melting of the Greenland Ice Sheet caused by global warming add fresh water to the ocean which reduces the salinity and density of the water.

This subsequently prevents the warm water which has travelled north from sinking as it cools and this breaks the convection cycle ultimately weakening the flow of the AMOC.

Experts warn that by 2100 the Gulf Stream System may weaken by as much as 45 per cent, bringing humanity dangerously close to a ‘tipping point’ where the vast ocean current becomes unstable.

Should this happen, the eastern US coast will face rising sea levels and western Europe will face more extreme weather.

For example, winters will be much colder and it is possible heat waves will become more common and less rain will fall during the summer. 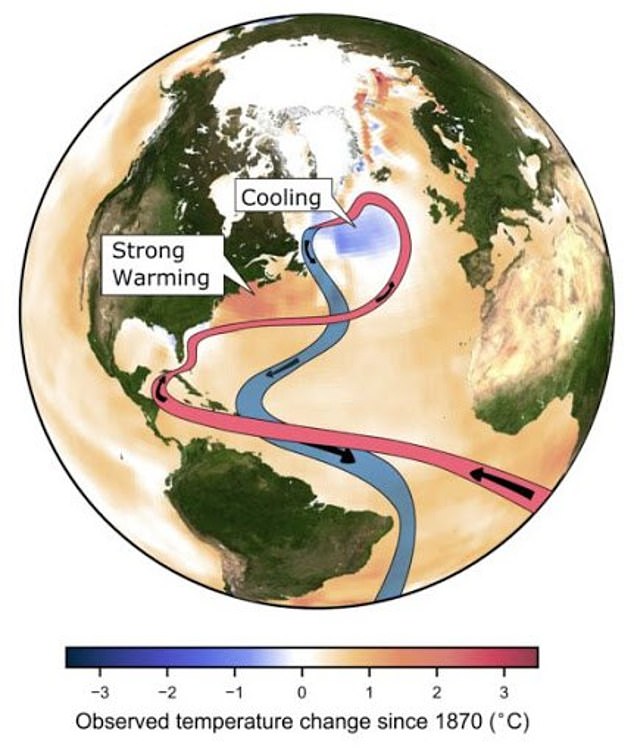 ‘This work provides new long term context and reveals that prior to the era of human induced climate change the Atlantic overturning circulation was relatively stable and stronger than it is now,’ says Dr Andrew Meijers, Deputy Science Leader of Polar Oceans at British Antarctic Survey, who was not involved in the study.

‘This indicates that the slowdown is likely not a natural change, but the result of human influence.

‘The AMOC has a profound influence on global climate, and particularly in North America and Europe, so this evidence of an ongoing weakening of the circulation is critical new evidence for the interpretation of future projections of regional and global climate.

‘Additionally, the AMOC is frequently modelled as having a tipping point below some circulation strength, a point at which the relatively stable overturning circulation becomes unstable or even collapses.

‘The ongoing weakening of the overturning means we risk finding that point, which would have profound and likely irreversible impacts on climate.”

The study was published in Nature Geoscience.

Maggots must be mass-farmed to combat malnutrition in humans, study says

India Covid variant: is it a threat to the UK’s reopening plans?

Space junk could be made worse by increasing climate change

Slim new G Steel is the ideal introduction to the G-Shock’s...