HONG KONG — More than two dozen companies making their debuts on the Shenzhen Stock Exchange’s ChiNext market under new IPO rules soared in early trading on Monday, with one stock surging more than 500%, a hopeful sign to hundreds of other Chinese companies eyeing listings on the Nasdaq-style board just as access to U.S. capital markets shuts down.

Twenty-nine companies have been approved for flotations so far, including the 18 that listed on Monday, according to the Shenzhen exchange’s website. Those 18 have raised 20 billion yuan ($2.9 billion), the Nikkei Asian Review has calculated, based on their prospectuses.

Companies making their debut on the technology-heavy ChiNext board, which was launched in 2009, include Beijing FengShangShiJi Culture Media, which ended the morning session 45% higher, and Ningbo KBE Electrical Technology, which surged 521%.

This opening compares with gains of 84% to 400% logged by the 25 companies who took part in the first day of trading of the rival Science and Technology Innovation Board, or STAR Market, in Shanghai in July 2019. The 95 companies that have listed on the STAR Market so far this year have averaged first-day gains of 226%, according to data from Dealogic.

Historically, stocks of newly listed companies on mainland exchanges in Shanghai and Shenzhen have been limited to first-day gains of 44%. That cap is not imposed on the STAR Market or ChiNext under the new rules. 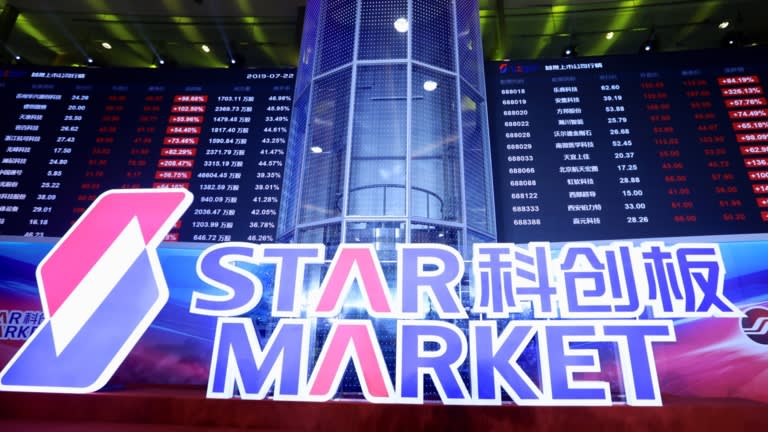 ChiNext’s reforms follow listing rules for Shanghai’s STAR Market, which was proposed by Chinese President Xi Jinping in 2018 to give local startups an alternative to listing abroad.

As many as 300 more companies have indicated interest in tapping the exchange for initial public offerings, three people familiar with the deals said.

“With a decoupling and worsening relations with the U.S., there is a pressing need for China to accelerate the growth of its own financial markets,” said Liao Qun, Hong Kong-based chief economist at China CITIC Bank International. “Even though some companies managed to get listed in the U.S. recently, it’s very clear that the U.S. market is not reliable in the long run.”

China is easing rules for IPOs as part of its efforts to reform the country’s stock markets and channel capital toward startups. The moves come as authorities in the U.S. this month revealed plans to kick out already-listed Chinese companies by January 2022 and block new share offerings immediately if they do not grant American regulators access to their audit documents.

Chinese companies have declined to share their documents, citing domestic laws that ban such access on the grounds that the papers may contain state secrets.

Under the new listing rules that began in June, the Shenzhen exchange examines IPO applications based on disclosure requirements. Companies wanting to go public no longer need approval from the China Securities Regulatory Commission, shortening the time it takes between filing the IPO documents to listing.

The changes put ChiNext on the same level as Shanghai’s STAR Market, which has operated under those rules since its launch last year.

It took an IPO applicant 202 days on average to get approval to list on the STAR Market as of the end of April, according to data compiled by research and advisory company China Renaissance. At ChiNext, the timeline extended to 590 days, according to the data. Bankers and analysts expect that gap to narrow with the changes being implemented by ChiNext.

“With this registration system, we feel even more excited because this is a way to move away from the traditional Chinese system practices for the past decade, where the China Securities Regulatory Commission goes through every application and approves it based on stringent measures,” said Eugene Qian, chairman of UBS Securities in Shanghai.

“While CSRC still has the final say, the exchange does most of the IPO vetting and this system can gradually expand to some more boards, which will make it faster for hundreds, if not thousands, of companies to raise capital,” Qian said. 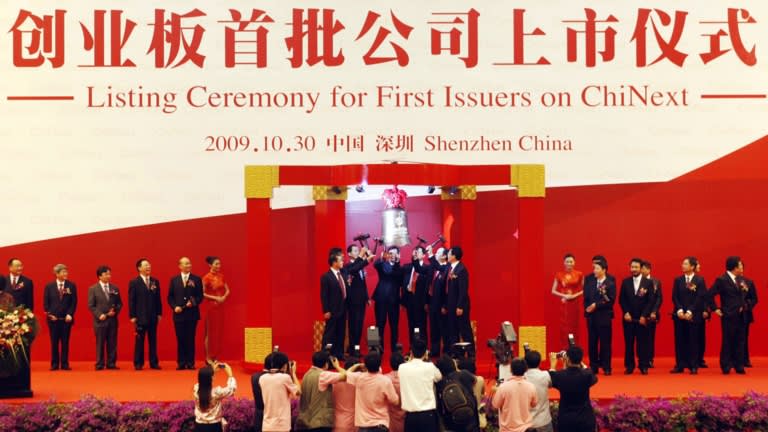 The ChiNext reforms follow the successful experiment at the STAR Market, which was proposed by Chinese President Xi Jinping amid the trade war with the U.S. in 2018 to give local startups an alternative to listing abroad.

Since the STAR Market opened for business in July last year, more than 150 companies have listed to raise over $33 billion, data from Dealogic shows. This year, it is the third-largest exchange for new listings behind the New York Stock Exchange and the Nasdaq.

Both registration-based boards in Shanghai and Shenzhen “certainly serve the needs for firms to raise capital amid the escalating U.S.-China tension,” said Guo Xiang, an analyst at Guodu Securities in Shanghai.

While ChiNext’s reforms ease the IPO route for companies, the U.S. markets cannot be completely counted out, according to Liao of CITIC and Shanghai-based Lu Ming, head of the technology, media and telecom group at Aequitas Research.

Even with the relaxation of IPO rules, Liao said that the Shenzhen tech board still is not comparable to those in the U.S., in terms of market capitalization and maturity of regulations. “It takes time,” he said.

Twenty-two Chinese companies have already raised $6.1 billion on U.S. exchanges so far this year, almost doubling the amount raised in all of 2019, according to Dealogic.

Companies including Lufax, an online wealth portal and a unit of Ping An Insurance Group, and Xpeng, an electric carmaker with ties to Alibaba Group Holding, are lining up to raise a further $4 billion. That would make this the biggest year for listings of Chinese companies in the U.S. since 2014, when Alibaba raised $25 billion on the NYSE.

Still, the easing of rules will be a boon for retail investors, who account for 80% of the volume on Chinese stock exchanges. Such investors have been eager to get their hands on early-stage startups.

But those investors had been deprived of that opportunity until the STAR Market last year allowed in companies with dual-class shares — a common setup at startups aimed at preserving founders’ voting rights — becoming the only major onshore exchange to do so. Now with ChiNext joining the fray, companies have another option and can expect a quicker approval, analysts said.

Companies in the tech, media and telecommunications sectors, which tend to have more complicated corporate structures, are expected to be “major beneficiaries,” Lu at Aequitas Research said.

Instacart to eliminate about 2,000 jobs and GitHub head of HR resigns – TechCrunch

Augmented reality’s awkward phase will be long and painful – TechCrunch

Syracuse dominates No. 16 Virginia Tech in 78-60 win – The Herald Review

In UK, 79% Of Drivers Could Charge An Electric Car Just...