SHENZHEN — The southeastern Chinese city of Shenzhen, a global manufacturing hub that bustles with technology-driven startups, is facing radical changes in the global business climate with massive implications for its future.

No sooner had it overtaken neighboring Hong Kong in terms of gross domestic product, when Shenzhen was whacked by the trade war with the U.S. and the novel coronavirus pandemic. Those twin blows choked off the flow of venture capital into the city’s young and growing companies.

Raising funds has suddenly become a challenge for manufacturing ventures. Even unicorns, as privately held startups valued at more than $1 billion are known, are struggling to adjust.

With the COVID-19 pandemic sending investors running for cover, Shenzhen finds itself at a crossroads. Chinese venture-capital investment in the first three months of the year plummeted, falling about 40% from a year earlier. Manufacturing startups are finding it especially difficult to raise finance because “their customer bases tend to be smaller than those of internet players,” according to Ding Ke, a researcher at the Institute of Developing Economies, a Japanese think tank.

Bill Liu, also known as Liu Zihong, chairman and CEO of gadget maker Royole, admits things are tough. “The new coronavirus is hurting sales of products like smartphones,” he said.

Among other things, Royole makes flexible organic light-emitting diode displays for smartphones and other devices. The company, a paragon of the city’s highly competitive culture and innovative spirit, has been hit hard by slumping sales of foldable smartphones.

But Liu remains optimistic. “We also see new business opportunities,” he said. Royole sees big growth potential in online education, which has become a hot sector due to coronavirus lockdowns. It has stepped up its marketing of the RoWrite smart notebook — essentially a standard pad of paper with sensors embedded into it that lets users digitize their writing and drawing. The notebook and a smart pen connect to Royole’s smartphone app, converting markings on the page to digital format in real time. 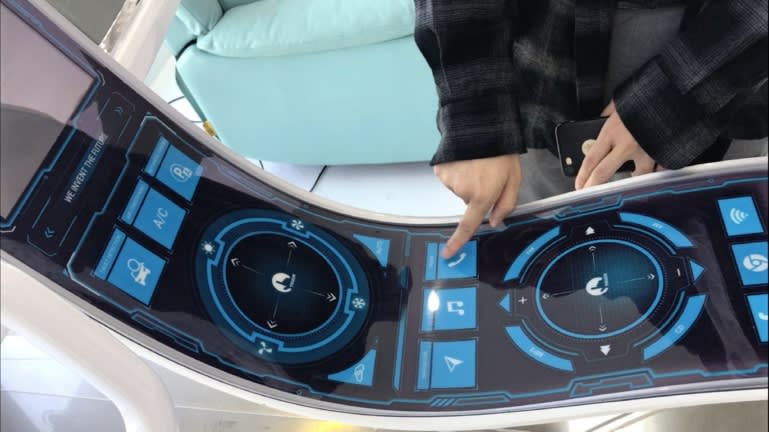 Royole, one of Shenzhen’s 10 unicorns worth a billion dollars or more, is developing flexible touch panels for aircraft and cars.
READ  Top Tech: Yorkshire class of 2019 go for growth while adapting to Covid-19 challenges - The Business Desk

Royole is also developing flexible displays for aircraft and cars. The company plans to spend some 5 billion yuan ($719 million), possibly in 2021, to more than triple its production capacity for displays.

Shenzhen was designated a special economic zone in 1980 under then-leader Deng Xiaoping’s economic reform and liberalization initiative, which was launched in 1978. This set the stage for the city’s transformation into “the Silicon Valley of hardware.” It is home to telecom equipment giant Huawei Technologies and chipmaking plants owned by Taiwan’s Hon Hai Precision Industry, better known as Foxconn.

The city has been a driving force behind President Xi Jinping’s “Made in China 2025” strategy, announced in 2015, which aims to turn the country into a technology superpower. Shenzhen’s GDP has tripled in the past 10 years, surpassing Hong Kong’s in 2018.

The city’s growing manufacturing might has spawned myriad startups. Shenzhen boasts 10 unicorns founded in the past decade including, Royole, according to 36Kr, a Chinese website that reports on startups. Most are located in the city’s Nanshan District, which is home to many leading companies, including online conglomerate Tencent Holdings, as well as research institutes of respected universities and startup support organizations. 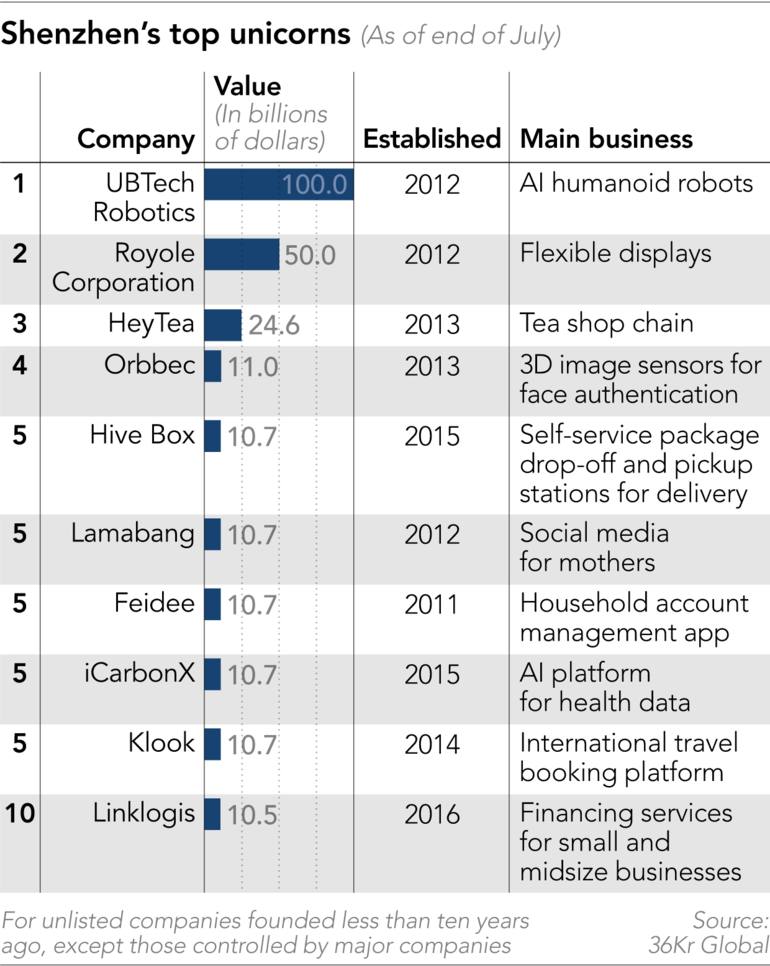 Like Royole, many of these companies are trying to diversify their business portfolios to attract investors.

Ubtech Robotics, an artificial intelligence and humanoid robot manufacturer founded in Shenzhen in 2012 now valued at $10 billion, has developed a robot for hospitals that quickly takes people’s temperatures. Using cameras and sensors, the robot can measure the skin temperature of 200 people a minute. A spokesman for Ubtech said that in the coming years the company will focus more on using AI to control the behavior of robots and enhance their ability to understand their environment.

In addition to making things, many promising unicorns in Shenzhen are creating software. iCarbon X is growing fast with its AI-based personal genomic analysis services. Lamabang has developed a popular social media platform focused on parenting.

Services and software make up a growing slice of Shenzhen’s economy, their share of the city’s GDP has risen nearly 10 percentage points in the past decade to about 60%, highlighting Shenzhen’s shift away from manufacturing.

The future of the city as a hub of startups rivaling Beijing and Shanghai will depend on whether it can nurture new industries without losing its traditional manufacturing prowess.

Be self-confident but humble

Redefining our environment: Space is not placeCommentary on how COVID-19 has changed us – 83degreesmedia