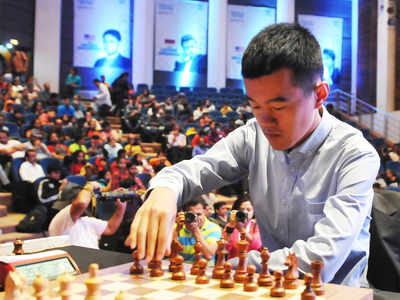 CHENNAI: It was a day of twists and turns in the Chessable Masters, the next stage of the Magnus Carlsen Chess Tour which carries a total prize pot of $1 million.
Eventually, Ding Liren overcame internet connection problems to book a place in the knockout stages of the tournament from Group B. The other players in the group are Fabiano Caruana, Ian Nepomniachtchi, Teimour Radjabov, Maxime Vachier-Lagrave and Anish Giri. Group A, on the other hand, comprises Carlsen, Hikaru Nakamura, Daniil Dubov, Alexander Grischuk, Vladislav Artemiev and Pentala Harikrishna.
It wasn’t at all a smooth sailing for the Chinese Grandmaster. Liren’s internet connection failed when he lost against leader Anish Giri, who already qualified for the last eight. However, he later benefitted when Russia’s Ian Nepomniachtchi suffered a mouse-slip. Nepomniachtchi, though, recovered and made the quarters. World No. 2 Fabiano Caruana also qualified after finishing fourth.
“I knew today that I would have to be fighting from the first game to the last so I was ready for that but I was quick lucky along the way. I was slightly better against Ding but it was going to be a draw and then he disconnected. I’m really happy for him that he bounced back because it would be so unfortunate for him if he had to finish last because of the disconnection,” Giri was quoted by Fide website.
Giri, Ding, Nepomniachtchi and Caruana will join World champion Magnus Carlsen, Vladislav Artemiev, Hikaru Nakamura and Alexander Grischuk in the quarters. The winner will take home the top prize of $45,000 and a ticket to the $300,000 tour Grand Final on August 9 to 10.

Supernatural horror with Joanne Froggatt – podcasts of the week