No decisions have been made as to whether to hold another referendum, but CAT wants to be prepared if TSPLOST is again looked at as a way to help meet transportation needs, DiMassimo said during an interview on Monday.

“There’s not any specific calendar for it that I know of at this point but it’s us being diligent and prepared,” she said. 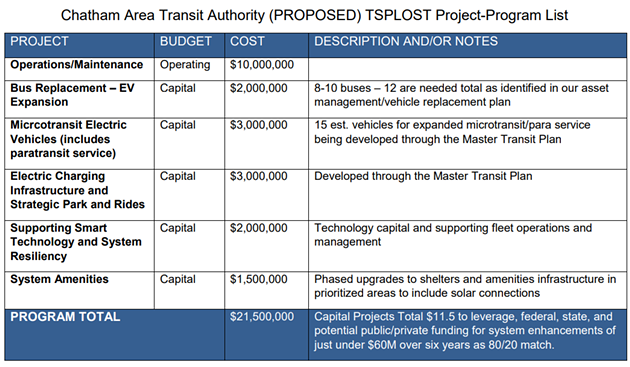 Chatham County spokesperson Catherine Glasby said Tuesday morning that it is a possibility that the TSPLOST effort will be renewed this year, but no firm discussion with the municipalities has happened at this point.

The 2022 TSPLOST referendum was defeated by a margin of only about 1,400 votes, or less than 2%, out of about 103,000 votes in November last year, according to the Board of Elections summary report.

The 2022 vote came about 10 years after voters rejected a regional TSPLOST referendum, which, unlike last year’s proposal, required approval from residents of neighboring counties.

A referendum would probably not be held until 2024 if a decision was made to move forward with another attempt, DiMassimo said.

“It is important to have conversations with the community and thoughtful consideration of any projects well in advance,” DiMassimo said. “When you think about that kind of planning that’s needed to be successful and to be transparent, CAT is doing the right thing by starting the conversation in the community early.”