There is a warung (small roadside shop) called Toko Eka Makassar. Despite its name, the kiosk is not located in the South Sulawesi city of Makassar, but in East Jakarta. It has an ample stock of daily necessities, so it is no wonder people come to the store in droves every day, seven days a week.

No matter what kind of basic goods you need, from vegetable oil and dishwashing liquid to staple foods, the small kiosk has it all.

Yet, unlike the buyers, who still need to come to the warung to get the things they need, the owner of the kiosk no longer needs to travel to the shops of agents to stock up on these in-demand products that cater to popular demand. Eka, the shop owner’s 23-year-old son, said he had introduced his mother to an application called Mitra Tokopedia (Tokopedia Partners) to help them relax a bit more and cut their warung’s operating costs.

Since then, to run her business, his mother simply fiddles with her smartphone all day, seven days a week. Recently, she’s been able to supply her shop through online grocery shopping, still using the same application.

All in all, by using the application, Eka and his mother no longer have to deal with all the hassles related to running a kiosk. Furthermore, they can save the money they used to spend to travel from their shop to their agents as additional funds for their business.

“Not to mention that online grocery shopping using the application offers competitive prices. We can order the product before 7 a.m. and the online agent will deliver it on the same day. The agent also offers plenty of discounts and special offers,” Eka said. 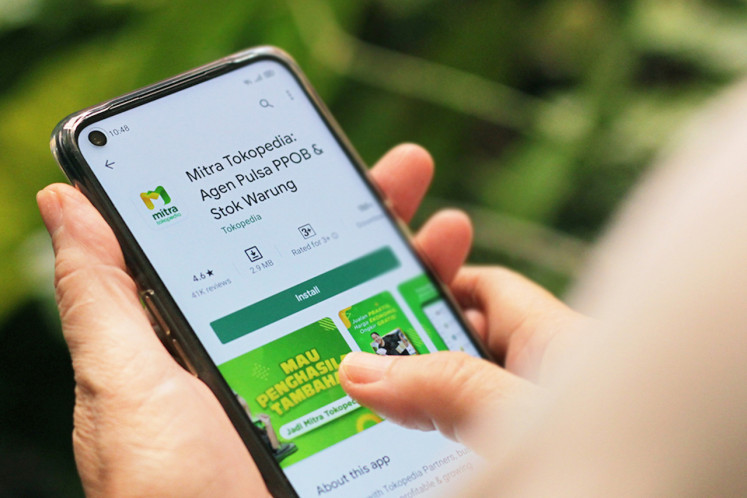 Moreover, the application allows small kiosks to help homebound customers pay bills ranging from electricity to water. Customers can even pay their taxes via the application.

He said that, as per October 2020, millions of such MSMEs across Indonesia had joined the Mitra Tokopedia platform. For instance, many small kiosk and traditional market stall owners (locally known as toko kelontong) across Indonesia’s 70 cities and regencies from Aceh to Manado in North Sulawesi have started to offer their grocery goods via the application. 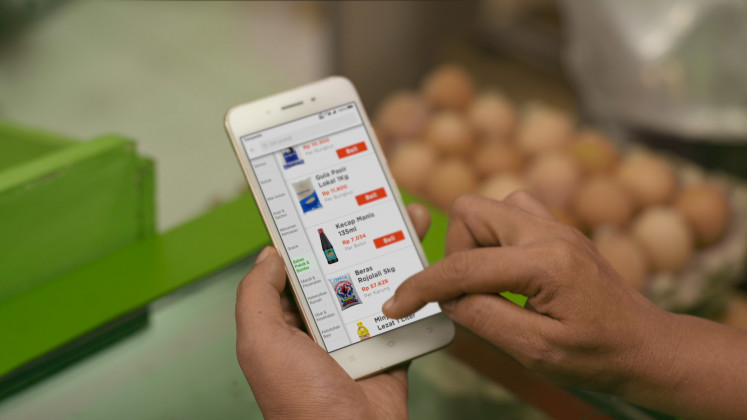 Almost 100 percent of Mitra Tokopedia users have been able to cut their transportation costs by more than Rp 50,000 (US$3.55) per week by benefiting from the grocery feature in the Mitra Tokopedia application. (Courtesy of Tokopedia/.)

Based on a Tokopedia survey conducted in October 2020, almost 80 percent of the owners of these small kiosks and traditional market (Mitra Tokopedia) stalls have increased their profits upon joining the Mitra Tokopedia platform. Furthermore, 8 of 10 Mitra Tokopedia users have been able to purchase additional stocks for their warung, and 9 of 10 have also been able to diversify the types of digital products they sell, the most in-demand products being phone credit, drinking water bills payment, Health Care and Social Security Agency (BPJS) insurance premiums as well as game vouchers.

In terms of operational efficiency, almost 100 percent of Mitra Tokopedia users have been able to cut their transportation costs by more than Rp 50,000 (US$3.55) per week by benefiting from the grocery feature in the Mitra Tokopedia application.

More than 35 percent of all Mitra Tokopedia users have benefited from the application’s non-cash transaction feature, also known as the digital wallet. Almost 25 percent of all users have been able to get a monthly income after having lost their previous jobs as corporate employees. More than 50 percent of the Mitra Tokopedia users said that they had attained greater financial independence since joining the platform.

Apparently, Eka and his mother are not the only ones reaping the benefits of their alignment with Tokopedia’s platform.

Mostakim, who runs a little kiosk in Bogor, West Java, said his revenue had increased by Rp 5 million ($354) since he had joined the online platform.

Meanwhile, Ine Febrina, who owns a small kiosk in Jakarta, said the grocery feature on the online platform had helped her earn millions of rupiah per month.

“We are not here to replace offline businesses; we are here to create synergy”, says Tokopedia of its agenda of bridging online and offline businesses through the application with the motto “Welfare for all Indonesian kiosks.”

“Tokopedia believes that small kiosk owners and traditional market vendors in Indonesia should spearhead this mission, considering that local MSMEs contribute more than 60 percent to state revenue. They have tremendous strength to help Indonesian economy recover [from the shocks caused by the COVID-19 pandemic],” he said.

When we look at Indonesia’s e-commerce sector as a whole, we can see trends, whereby these platforms help boost the business performance of local small kiosks and traditional market stalls, according to Centre for Strategic and International Studies (CSIS) research assistant Adinova Fauri.

“Furthermore, our studies show that MSMEs using e-commerce platforms enjoy a 21 percent profit boost from using e-commerce compared to those that don’t,” he added, citing a CSIS study surveying MSMEs in Greater Jakarta, Bandung in West Java and Surabaya in East Java.

Research studies from other think tanks corroborate the idea that e-commerce platforms can create mutually beneficial symbiosis involving local MSMEs, especially the small kiosk and traditional market stall owners, instead of an antagonistic relationship. In a similar vein, Indonesia’s MSMEs have also boosted the business performance of local e-commerce platforms.

According to the 2020 Google and Temasek report on the digital economy in Southeast Asia, furthermore, Indonesia’s e-commerce platforms still posted growth of 55 percent during the pandemic, driven primarily by sales of groceries as well as food and beverages.

The same report shows that local e-commerce platforms enjoyed a 37 percent increase in consumers during the pandemic.

“This means that the local MSMEs can enjoy great growth potential by tapping into these platforms’ new consumer bases, especially during soft lockdowns where people [prefer to shop online to] try to minimize physical contact with other people,” Adinova said.

The same report goes on to say that the growth of local e-commerce has offset the negative economic impact brought by a great decline in the tourism and other industries.

“Just as, instead of paralyzing local small kiosks and vendors, the penetration of minimarkets into rural areas has encouraged these traditional markets to boost their competitiveness in terms of convenience, product diversity and price, e-commerce can also drive the same thing,” he said.

“The presence of e-commerce, which transcends boundaries through the internet, could help local MSMEs boost their competitiveness even more to reach out to a more diverse range of consumers,” he continued.

To sustain this growth, he said, the government needed to accelerate internet and transportation infrastructure development across Indonesia.

Your premium period will expire in 0 day(s)

Life after death: Expert lays bare 'out of body experience' and what happens when you die

Science News in Brief: From cats on catnip to ancient European money