BMW is stepping up winter testing of the upcoming 2 Series Coupé ahead of its reintroduction next year, with new spy images giving us a clearer look yet at the firm’s smallest two-door model.

Heavy camouflage means it’s difficult to draw many conclusions from these new images beyond the overall profile being that of a classic two-door, four-seat coupé. Visible links to the shape of the latest 4 Series are apparent, in particular the long bonnet and wide rear stance, although at the front BMW appears to have grafted the face from the 2 Series Gran Coupé onto it, rather than borrow from the controversial 4 Series.

Due to be produced at the firm’s San Luis Potosí plant in Mexico, the 2 Series Coupé is known internally under the codename G42 and is scheduled for an unveiling during 2021.

Significantly, the new coupé shares very little of its architecture with the 2 Series Gran Coupé as it will be rear-wheel drive. Shunning BMW’s front-driven FAAR platform, it will instead utilise an evolution of its versatile CLAR platform. As well as underpinning BMW’s largest saloons and SUVs, the architecture is also found underneath the current Z4 and its Toyota Supra sibling.

That allows for the G42 2 Series to use a similar mechanical layout to today’s model, with a longitudinal engine mounting instead of the transverse layout found in the four-door 2 Series. 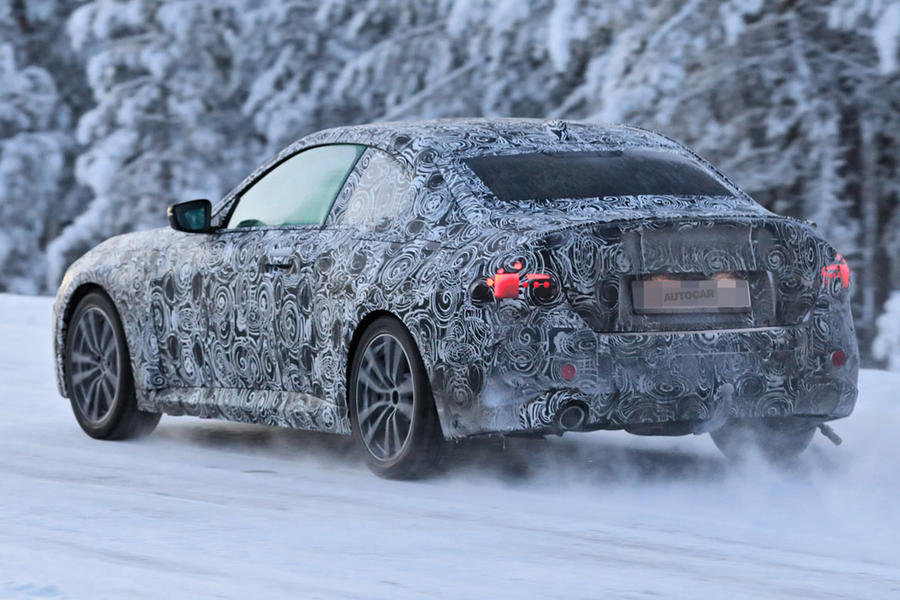 Details of what will power the new 2 Series variant at launch have yet to be confirmed, although expect to see three- and four-cylinder petrols, and possibly the return of a diesel, for the mainstream models. The main reason the new 2 Series Coupé is RWD, however, is that it allows BMW to reheat the much-loved recipe of the current M2.

Unlike the four-cylinder M135i and M235i Gran Coupé, Autocar understands that the full-fat M2, expected in 2022, will keep a six-cylinder powertrain. Specifically, it will use a detuned version of the S58 3.0-litre unit found in the BMW X3 M and X4 M, and soon to be offered in the latest M3 and M4.

Insiders hint that the M2 will offer at least 420bhp in its standard form – a 16bhp increase over today’s M2 Competition – to usurp the 416bhp Mercedes-AMG A45 S hot hatch. However, the CLAR platform provides the basis for a 48V electrical architecture, meaning the M2 is likely to feature mild-hybrid technology during its life cycle.

As before, the M2 should also retain a manual gearbox option, along with select variants of the standard 2 Series Coupé line-up. However, there won’t be a new generation of the 2 Series Convertible alongside this as BMW looks to streamline its model portfolio and focus resources on electrification.

Transportation Management Software Market Report (2020-2027) | The demand for the Market will drastically increase in the Future? – NeighborWebSJ

How often should I start my car in cold weather? – Baltimore Sun