Conservationists have drafted the first ever global map of bee diversity to help track the distribution of populations of the vital pollinators.

There are some 20,000 individual species of bee presently living on Earth — but accurate, compiled data on their distribution had been lacking.

Researchers from China, Singapore and the US analysed and validated nearly 6 million different data sources to map out the ranges of different bee species.

Their findings reveal that there are more species of the insects in the northern hemisphere than the south — and more in arid and temperate environments.

The creation of the map is an important first step in assessing the distribution and potential declines of bee populations, the team said. 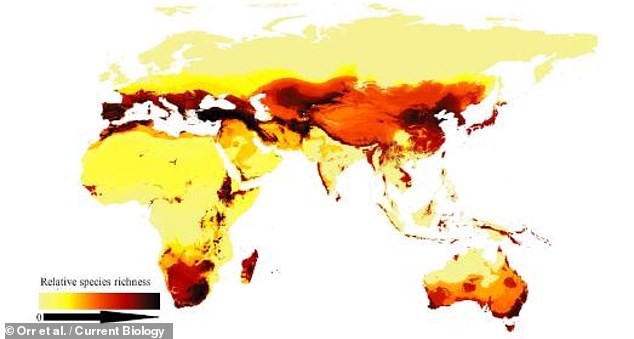 Conservationists have drafted the first ever global map of bee diversity to help track the distribution of populations of the vital pollinators. Pictured, part of the bee map

‘People think of bees as just honey bees, bumble bees, and maybe a few others,’ said paper author and biologist John Ascher of the National University of Singapore.

‘But there are more species of bees than of birds and mammals combined.’

‘The United States has by far the most species of bees, but there are also vast areas of the African continent and the Middle East which have high levels of undiscovered diversity, more than in tropical areas,’ he added.

Professor Ascher and colleagues cross-referenced a checklist of more than 20,000 bee species with nearly 6 million records on the occurrence of individual species, which allowed them to gain a clearer picture of population distributions.

‘We’re extremely interested in abundance of bees, but that’s something that has to be done in relation to a baseline,’ Professor Ascher explained.

‘We’re trying to establish that baseline. We really can’t interpret abundance until we understand species richness and geographic patterns.’

One such pattern revealed in the map reveals how more bee species are concentrated both away from the poles as well as the equator — in what experts refer to as a bimodal latitudinal gradient.

There are far fewer bee species in forests and jungles than in arid environments, for example, as trees tend to offer fewer compatible sources of food than do low-lying plants and flowers.

‘When it rains in the desert, there are these unpredictable mass blooms that can literally carpet the entire area,’ said paper author and zoologist Michael Orr of the Chinese Academy of Science.

‘There’s a much higher turnover in the desert because of how patchy the resources are year after year. So there’s a lot of potential for new species there.’ 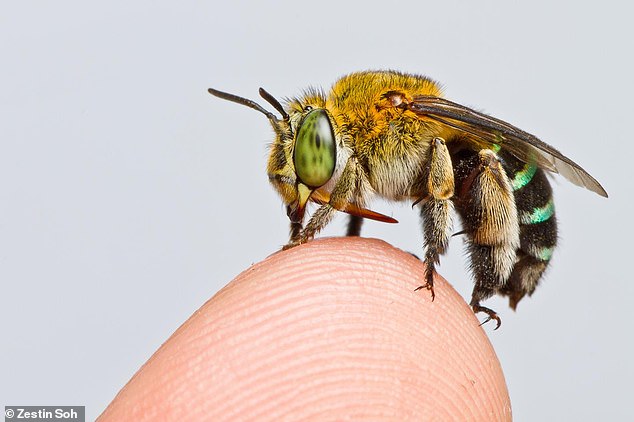 There are some 20,000 individual species of bee (including Amegilla andrewsi, pictured) presently living on Earth — but accurate, compiled data on their distribution had been lacking

Some of the patterns the team identified had been hypothesised by researchers in the past — but had previously been impossible to prove given the frequent patchiness, unavailability or unreliability of relevant data sources.

‘I was surprised how terrible most of the prior global data really was about bee diversity,’ said paper author and conservation biologist Alice Hughes of the Xishuangbanna Tropical Botanical Garden.

‘A lot of the data were just too patchy — or too concentrated on a small number of countries that have prioritized data sharing — to be able to use these resources for any large-scale analysis,’ she explained. 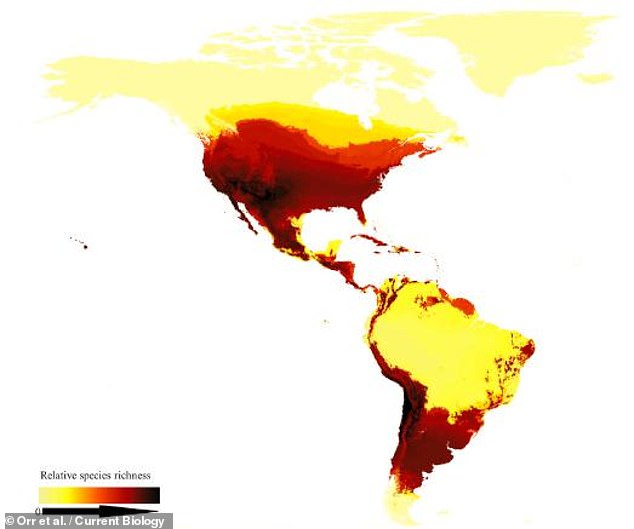 Experts from China, Singapore and the US analysed and validated nearly 6 million different data sources to map out the ranges of different bee species. Pictured, the map of the Americas

The team said that they hoped that their work will help in the preservation of bees worldwide — an important goal, given their key role as plant pollinators.

‘There isn’t nearly enough data out there about them — and providing a sensible baseline and analysing it in a sensible way is essential if we’re going to maintain both biodiversity and also the services these species provide in the future.’

The full findings of the study were published in the journal Current Biology. 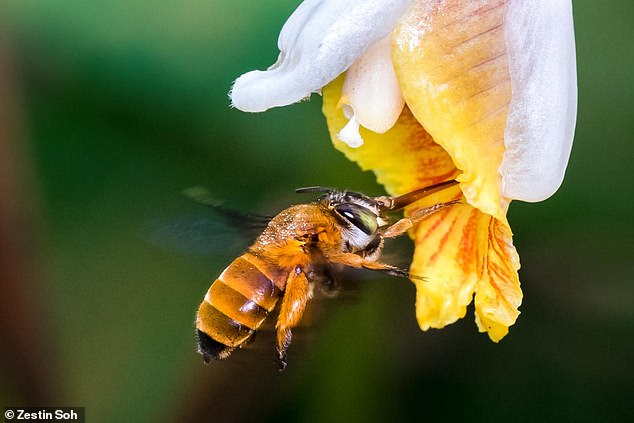 The creation of the map is an important first step in assessing the distribution and potential declines of bee populations, the team said. Pictured, a bee of the Amegilla insularis

Declines in recent months to honey bee numbers and health caused global concern due to the insects’ critical role as a major pollinator.

READ  The fullness of time - Hudson Valley One

Bee health has been closely watched in recent years as nutritional sources available to honey bees have declined and contamination from pesticides has increased.

Bees use sugar to fuel flights and work inside the nest, but pesticides decrease their hemolymph (‘bee blood’) sugar levels and therefore cut their energy stores.

When pesticides are combined with limited food supplies, bees lack the energy to function, causing survival rates to plummet.

See the auroras from space in newly released photos – WJBF-TV

Gesturing with your hands can make your words more memorable, new research suggests