Seven years after it first invested in a company that has called off plans to list three times since 2018, private equity firm BC Partners has turned to an unconventional buyer: itself.

The buyout group is in talks to sell its stake in academic publisher Springer Nature to a new fund that BC Partners itself would control, three people familiar with the matter said. The fund would be specially set up for the purpose of buying the Springer stake, and BC Partners would invest in it, alongside new external investors.

Such a deal could potentially value the world’s second-largest academic publisher by revenue at about €6bn, two of the people said. They cautioned that a transaction is not guaranteed and talks with the outside investors are continuing.

The transaction would let investors in a BC Partners fund that was raised in 2011 cash out of a 47 per cent stake in a business that BC Partners first bought into in 2013.

It would be among the largest examples of a trend that has become increasingly popular since the coronavirus pandemic began, in which buyout groups set up structures called “continuation vehicles” to buy companies that their older funds have held for a long time.


Value of Springer Science when BC Partners bought it in 2013

“The [private equity] investment strategy is to buy companies, spruce them up and sell them to third parties,” said Eamon Devlin, a lawyer at MJ Hudson, an asset management consultancy. “That’s not happening here [in continuation fund deals] . . . it’s asking for a second chance to generate returns.”

Private equity funds usually lock up investors’ cash for a decade, meaning there is pressure to sell or list companies in order to return the money once a fund nears the end of that time. But the pandemic has made that strategy harder by upending corporate business models and roiling the markets for initial public offerings — leaving a growing number of buyout groups selling the companies to their own newer funds.

BC Partners bought Springer Science for €3.3bn in 2013. It then merged it with the German family group Holtzbrinck’s Macmillan Science and Education, which owns the Nature journal, in a 2015 deal that valued the newly-created Springer Nature at more than €5bn.

Three separate attempts by BC Partners to list Springer Nature have been called off in less than three years. First in May 2018, then in March this year when the effects of the coronavirus pandemic first roiled markets, and again in October.

The company could still pursue an IPO in the future, one person familiar with the matter said, adding that Holzbrinck wanted to keep a stake in the company in the long term. 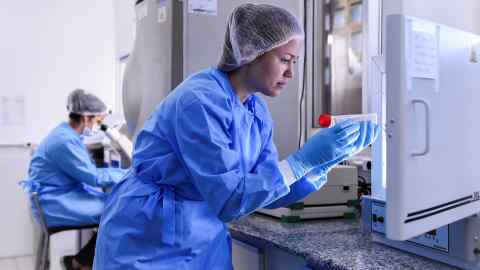 “It’s a stable, solid business,” another of the people said. “With public markets there are short-term targets all the time,” but the sale to a new BC Partners fund would let the company “plan ahead a bit more over the medium to long term.”

If agreed, a €6bn valuation would put the company’s value at about 10.4 times its €575m in earnings before interest, tax, depreciation and amortisation in the year to December 2019.

Springer Nature has leverage of about 5.5 times its earnings, according to a report by Moody’s rating agency published in August. The report said the company had a “good track record of stable organic growth” and “a predictable subscription-based business model”. It estimated its revenues would fall about 5 per cent in 2020 because of the effects of the coronavirus pandemic.

Academic publishers have come under pressure to change a subscriptions-based business model to accommodate so-called open-access publishing, which breaks down paywalls and makes often publicly-funded scientific research free to read.

Springer Nature had before its first attempted listing in 2018 warned investors that growing pushback against paywalls for publicly-funded research could hurt its revenues. But Frank Vrancken Peeters, the company’s chief executive, told the Financial Times earlier this year that open access publishing “works financially”.

In October, the company reached a deal with a consortium of German libraries that bundled the right to read and publish open access under one agreement, the first ever to include its flagship Nature titles. Publishers have been wary of allowing free access to research published in its top journals, fearing it might dilute their value when deals are renegotiated with subscribers.

Netflix still several steps ahead in strategy for wooing subscribers

Is it time to leave WhatsApp – and is Signal the answer?