Fresh analysis of Europe’s earliest known battle has thrown up the possibility the 1,400 people who died at the site, in Germany‘s Tollense Valley, were not warriors engaged in a brutal melee, but ambushed merchants who were ruthlessly slain.

Human remains at the site in North East Germany, near today’s border with Poland and 80 miles north of Berlin, were first found in 1996.

Experts have since tried to explain how 1,400 people perished in this one event, when the region was sparsely populated throughout the Bronze Age.

Scroll down for down for video 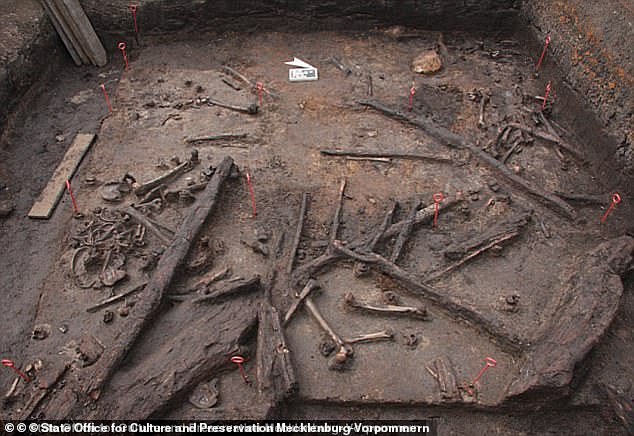 It was believed to be the oldest  one of the biggest and most brutal battles fought in the Bronze Age, and now archaeologists believe the battle of the Tollense Valley 3,250 years ago was an ambush and massacre 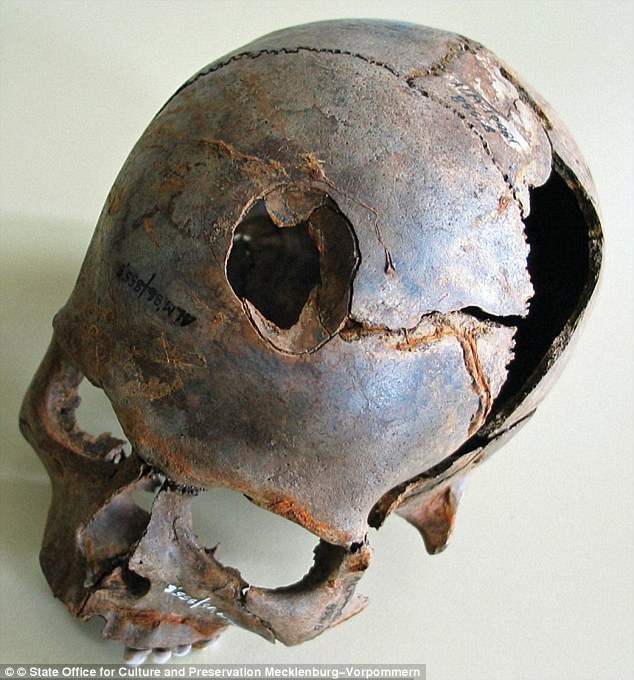 Experts believe that the site in what is now modern-day Germany featured around 1,400 people and they were likely traders and merchants

Previous theories centred around a great battle for control of a bridge over a river near the Baltic sea.

But Detlef Jantzen, chief archaeologist for the state of Mecklenburg-West Pomerania, says he site is more likely that of a merciless slaughter.

He now believes that the victims were made up of diverse vendors passing through the region, at least some of whom were travelling in a large caravan.

He says they were likely set upon by bandits, who robbed and murdered them.

Among the weapons found in Tollense is a wooden club in the shape of a baseball bat and another stick comparable to a mallet.

The ‘baseball bat’ is made of ash wood, which is well known for its strength and elasticity while the mallet is made from sloe.

The findings led archaeologists to conclude the site could be the earliest Bronze Age battle site ever found.

‘There is no doubt that such hammer-like, wooden weapons could cause heavy lesions,’ the researchers said.

‘Wooden clubs are sometimes reported from bogs in northern Germany [and] clubs have been found at Wiesmoor and Berumerfehn.’

The archaeologists continued that wooden clubs of various forms are also reported being used by Native Americans, for example, for hunting and warfare, but the Tollense Valley represents the first prehistoric site in Central Europe where such weapons have been found in association with human bones.

Research into the remains of the dead reveals some of the people had skeletal deformations only brought about by a lifetime of carrying heavy loads.

Mr Jantzen believes either merchants or their slaves would have spent a lifetime lugging around their wares, leading to extreme stress on their lower spine and legs.

‘For this reason we have wondered whether there is another possible explanation for this violent conflict: rather than a warlike battle, an ambush scenario upon a large group.’

This theory explains why among the 1,200 human remains buried at the site,  from 145 different people, there are women and children as well as men.

Had this been a true battle, historians believe it would have been waged between male warriors only.

Since the 1980s, several pieces of evidence of a battle have been found in river sediment at the site, including daggers, knives and skulls.

In 1996, an amateur archaeologist found a single upper arm bone sticking out of the steep riverbank with a flint arrowhead embedded in one end of the bone.

A systematic exploration of the site began in 2007, after archaeologists unearthed an enormous ‘battlefield’, as well as 140 skeletons and remains of military equipment. 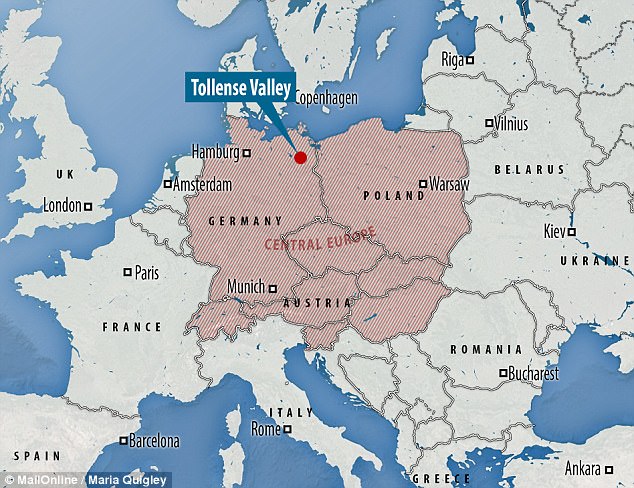 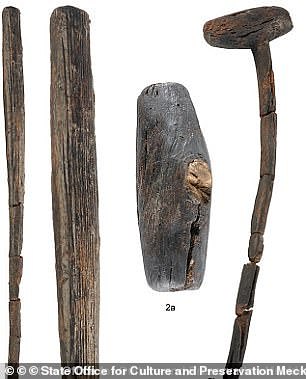 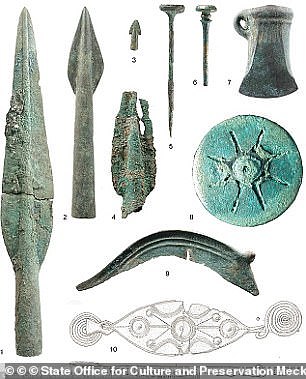 Since the 1980s, several pieces of evidence of a battle have been found in river sediment at the site, including daggers, knives and skulls. A systematic exploration of the site then began in 2007, since which archaeologists have unearthed an enormous battlefield, as well as 140 skeletons and remains of military equipment. Pictured are some of the artefacts found 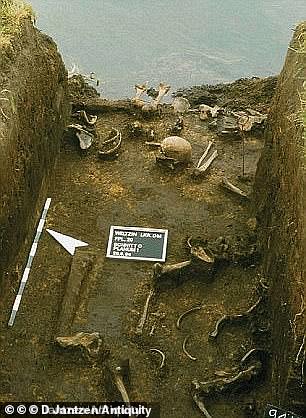 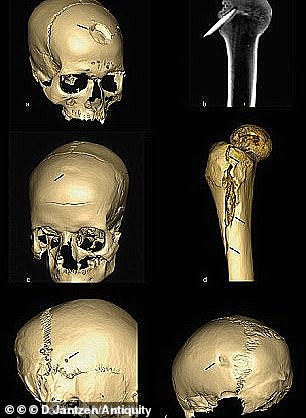 To understand more about the fighters, the researchers previously conducted a chemical analysis of the skeletons, looking for elements like strontium, which can leave a geographically specific signature in bones

Isotope analysis has previously found the people who died came from all over Europe and were not a local group.

While unable to pinpoint the exact location of the people who died, the previous research did find that a large swathe of the victims came from Southern Europe.

This had been attributed to a marauding, cohesive army, but now it is thought to be a diverse group of tradespeople.

Although Germany at the time was not as sophisticated as its contemporaries in Mesopotamia and Ancient Greece, it did have trade and elements of cultural influx.

Amber from the Baltics was sold as far south as Egypt and metals found in what is now Germany originated from the Middle East.

‘All the metal here comes from elsewhere,’ Dr Jantzen says.

‘But it wasn’t just the metal that came here: there were also glass beads from Egypt and Mesopotamia, and even a silk veil from the east Mediterranean.

‘These are luxury goods we have found here and they have a very long journey behind them.’

The time when the battle took place was also right in the middle of a huge cultural shift in Central Europe, as people arrived from the Mediterranean.

Professor Thomas Terberger, an archaeologist who worked on the project, told Live Science in 2017: ‘It’s not by accident that our battlefield site is dating to this period of time.’

Alligators have the ability to regrow their tails just like lizards: Study – Republic World

'It's Been Heartbreaking': 15 Family Members Battle COVID-19 After A Small Gathering In North Texas – KERA News

Earth's second minimoon was the size of a car and came within 8,100 miles of Earth

Facebook 'Drives' lets users collect clothing, food, and other essentials for those in need

Qantas looks at smartphone app for COVID-19 'vaccine passport' – One...