Austria has noted a record number of passenger plug-in electric car registrations in August – 2,071, which is two times more than a year ago.

Despite the fact that the 2020 year turned out to be very challenging for the Tesla Model 3 in Europe, it managed to stay on top in Austria with a small advantage over the Renault ZOE (1,436 vs 1,329 after eight months). The third best is Kia Niro EV (e-Niro) with 592 copies YTD.. 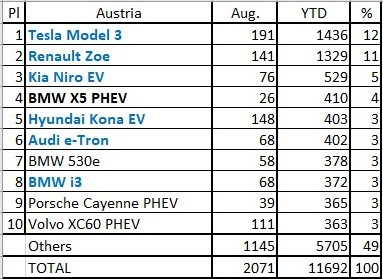 Continental Plays with the Future of Car Audio – Car and Driver

Hammer down: The UK's most affordable car auction

Grand touring: 1000 miles across Europe in the new Alpina B3