Home Autos Audi Will Use 4 Electric Car Chassis Designs, But Cancels Electric A8... 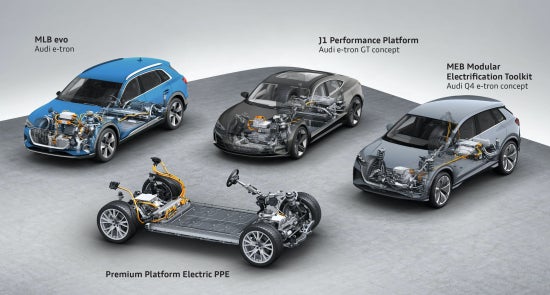 Automakers rely on common platforms that are used to manufacture a variety of automobiles. As Henry Ford taught us, standardization is the key to making money in the car business. Cars from the same manufacturer may look vastly different as they sit glinting in the sun on dealers’ lots. They may be shorter or longer, sedans or SUVs, higher or lower, but underneath the skin, hundreds of critical items and measurements are exactly the same, one to the other.

Even little things like air conditioning ducts, radios, seats, and seat belts all have the same relationship to each other. According to Green Car Congress, Audi will utilize 4 different EV platforms to electrify its product line.

Volkswagen has created an all new electric car platform it calls its MEB tool kit. It will underpin the upcoming ID.3 passenger car, the ID.4 SUV, and someday soon a smaller electric car similar in size and price to today’s e-UP. That same MEB platform will also form the basis for electric cars from Audi such as the Q4 e-tron SUV that will be a corporate cousin to the ID.4.

Audi expects to offer 30 electrified models by 2025 and 20 of them will be battery electrics. The MEB platform will serve as the basis for the electric versions of the company’s smaller offerings, the A1, A3, Q2, and Q3.

For larger cars, similar to the current A4 through A7 and Q4 through Q8, Audi will rely on the new Premium Platform Electric (PPE) jointly developed with Porsche for the Taycan.  The PPE tool kit can be configured to fit many different size vehicles and can use either or single or dual motor powertrain configuration.

Audi is also developing the J1 chassis for its proposed e-tron GT sports concept. Unlike the MEB platform, the J1 and the PPE will use an 800 volt electrical system that permits fast charging using up to 350 kW of power. In concept form, the J1 will feature permanently excited synchronous motors. In a PSM, the rotor moves in coordination with the magnetic field of the stator (the stationary part of the motor in which the rotor rotates). By comparison, the rotor in an asynchronous motor rotates slower.

The final piece of the electric car puzzle for Audi is the e-tron SUV that went on sale last year. It is built on a heavily modified version of the companies MLB evo chassis used for current large Audi models. There are no current plans to build future Audi electric cars on that platform.

According to Electrive, Audi has reversed course and now says it will not build a battery electric version of its top of the line A8 sedan. Instead, it will boost the battery-only range of its plug-in hybrid powertrain, which today has a paltry 28 kilometers of range. The decision has everything to do with the downward trend in sedan sales.

READ  Vintage Mini owned by model Christine Keeler during Profumo scandal could be yours for £20,000

A year ago, Audi management said an electric A8 was under development, but the A8 simply doesn’t have enough potential customers to justify spending the money it would take to turn it into a fully electric vehicle. The current A8 is based on the MLB evo platform that also serves as the foundation of the Audi e-tron SUV.

Instead of moving forward with the electric A8 project, Audi says it will focus its attention on building battery electric SUVs, the sweet spot of the new car market in virtually every country around the world. That seems to be a smarter way to invest the company’s R&D funds going forward. Audi is well stocked with EV platforms. Now it needs to start using them to build some serious electric cars.