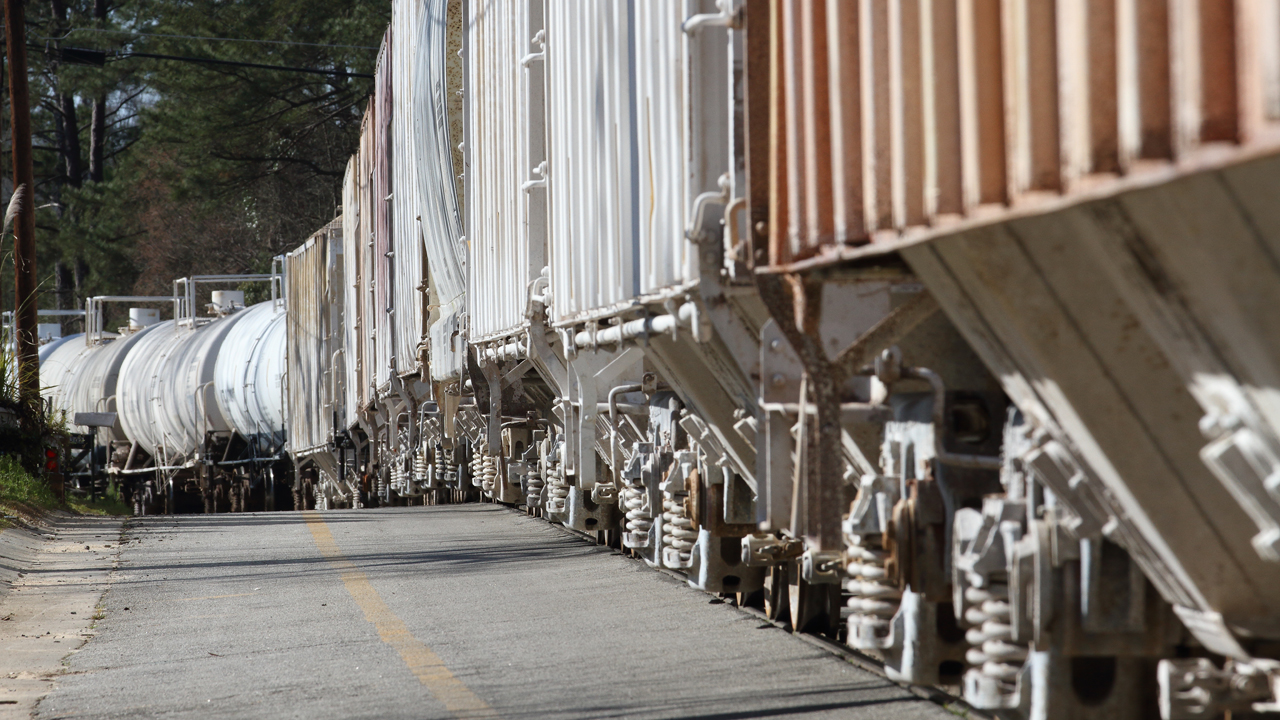 RAILWAY AGE, FEBRUARY 2020 ISSUE: Even though M-976 dynamic performance may degrade with age and mileage, they appear to be less likely to cause derailments than non-M-976 trucks of similar age.

In the
years since Association of American Railroads’ (AAR) 2003 adoption of
Specification M-976, hundreds of thousands of M-976-compliant trucks have been
built. Some of them are now being taken out of service to be rebuilt under car
owners’ planned maintenance programs. Transportation Technology Center, Inc.
(TTCI) collaborated with several Class I railroads and a private car owner to
identify a sample of service-worn trucks and perform measurements and tests to
see how wear affects their dynamic performance.

Based on
information from car owners, 26 railcars with gross rail loads (GRL) of 286,000
pounds were identified as candidates for this study. Based on their maintenance
records, mileage and truckside wedge rise (a proxy indicator for overall truck
wear), trucks from six of these railcars were selected for more detailed
measurements. These truck samples included models by two manufacturers; their
service mileage ranged from 525,000 to 886,000 miles.

The 12
trucks from the six selected railcars were disassembled and examined for signs
of wear or damage, and had detailed measurements of their components taken.
Although only one truck had its wedge rise exceed the prescribed limit, each of
the 12 trucks had some of their components (such as the pedestal jaws, friction
wedges or column wear plates) worn to prescribed limits. A majority of the 12
trucks had broken springs (which were replaced prior to testing). One truck had
a cracked adapter pad, and two trucks were showing partial delamination of
adapter pads (Figure 1).

Four of the
truck sets (eight trucks) were then tested under selected M-976 testing
regimes. None of them met all of the M-976 acceptance criteria in twist and
roll, pitch and bounce, and hunting test regimes. For the dynamic curving test,
one truck set did not meet the acceptance criteria, and testing of two more
truck sets was interrupted because of safety concerns (significant wheel
unloading or poor steering—the latter likely caused by the condition of a
center bowl liner).

The data
showed that from 2003 to 2017, 598,198 railcars with 286,000 pounds GRL were
built—429,769 of them were equipped with M-976 trucks, and 168,429 with
non-M-976 trucks. Within those car populations, four cars equipped with M-976
trucks were involved in truck-caused derailments (two on main line track, one
on yard track and one on industry track), compared to 20 cars equipped with
non-M-976 cars (seven derailments on main line track, 10 on yard track, one on
a siding and two on industry track). The most common cause of truck-caused
derailments in either group was improper truck rotation. A non-parametric survival
analysis concluded that among the cars with a GRL of 286,000 pounds built
between 2003 and 2017, cars with M-976 trucks had a statistically lower rate of
truck-related derailments than cars with non-M-976 trucks.

This study
shows that even though the dynamic performance of M-976 trucks may degrade with
age and mileage, they appear to be less likely to cause derailments than
non-M-976 trucks of similar age.

The M-976
fleet is still relatively young, and truck-caused derailments are rare.
Therefore, this statistical analysis should be repeated in 3 to 5 years when
more M-976 trucks acquire longer time in service and more data on derailments
becomes available. In addition, it is recommended to test several M-976 trucks
with wedge rise over the prescribed limit, should they become available. This
testing could help assess whether the current prescribed limits for wedge rise
are appropriate.

This
research was performed as a part of the AAR’s Strategic Research Initiatives
program. Complete results of this study can be found in previously published
TTCI/AAR Technology Digests and research reports.

How to future proof your home – Flux Magazine

Analysis | The Technology 202: Other countries use surveillance to fight...