Arnaud Lagardère is nearing an agreement to give up the distinctive legal structure that has long granted him tight control over his eponymous French media and retail group in an effort to neutralise the threats posed by two billionaires and an activist hedge fund.

The French businessman is in talks to abandon the so-called commandite governance system, which was set up by his father when he founded Lagardère in 1992, in exchange for €200m-€250m, said people familiar with the matter. The commandite allows him a veto power on most company issues despite owning just a 7 per cent stake.

But Arnaud Lagardère has been backed into a corner by Vincent Bolloré, who has used Vivendi, the media company he controls, to build up a 29 per cent stake in Lagardère, as well as activist Amber Capital, which has long agitated for change and owns a 20 per cent stake.

To try to fend them off, he signed a deal with billionaire Bernard Arnault a year ago, which made the LVMH boss a partner with a 25 per cent stake in his personal holding company through which he controls the commandite. That also gave Arnaud Lagardère a much needed cash infusion to pay down personal debts.

The lifeline from Arnault bought the heir some time but also intensified the battle at the company since it prompted Vivendi not only to team up with Amber, but also to raise its stake to just under the limit before it would have launch a public offer.

In recent weeks, talks between the parties have accelerated to find a negotiated solution to the wrangling, people familiar with the matter said. The catalyst was the looming annual shareholder meeting in June since Arnaud Lagardère risked another rebellion against him with a potential vote to replace the board, said one of the people. 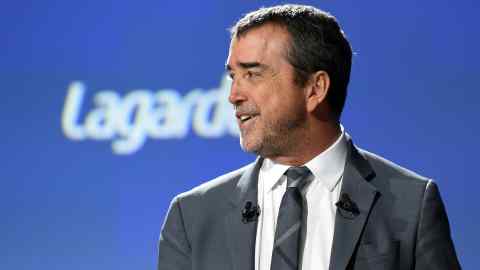 The outlines of the deal are that Arnaud Lagardère would receive the payment in exchange for agreeing to dissolve the société en commandite par actions (SCA) and replacing it with a conventional société anonyme. Existing shareholders would be diluted. Lagardère would hold an enlarged stake, three board seats, and a multiyear contract to be chief executive, said the people.

Vivendi would hold three board seats, while Amber, Arnault, and longtime shareholder Qatar Investment Authority would each have one seat.

The people cautioned on Sunday that the talks were continuing and could fall apart. A board meeting at Lagardère was expected on Monday and an announcement would soon follow.

If concluded, the accord would open up a new phase at the company where Arnaud Lagardère would still have to contend with powerful shareholders on a new board of directors.

But he would be able to declare a victory of sorts because his group would not be dismantled for now, and influential media assets, such as the Journal du Dimanche and Paris Match magazine, remain under his control.

Lagardère group was once one of France’s industrial powerhouses with businesses in aerospace, defence and autos, but has since been whittled down via asset sales to be focused on two main activities: the world’s third-biggest book publisher Hachette, and a travel retail business that operates Relay newsagents and duty-free stores in railway stations and airports.

Last year, the various factions had discussed several scenarios including one in which the group would have been broken up with Vivendi taking Hachette and LVMH the travel retail business. But Arnaud Lagardère has long said he did not want to break up the company and those talks did not reach fruition.

READ  The Importance of Video Marketing in eCommerce: 27 Stats You Need to Know [Infographic]

Are We Entering a New Phase for Social Media Regulation?

Euro 2020 on TV: calm start for BBC but for Savage dig at Boris Johnson

7 Avoidable Twitter Mistakes That Will Make People Unfollow You [Infographic]

LinkedIn Provides Tips on How to Increase Your Company Page Following