The jump from 4G to 5G will bring the biggest jump in iPhone data speeds since 2012 when Apple brought 4G connectivity to its smartphones. Manufacturers producing 5G handsets have seen the download data speeds of these devices jump 1.6 to 1.9 times faster than their LTE models. Should the iPhone remain in line with this range, overall data speeds in the U.S. should rise sharply starting later this year. That’s because Counterpoint says that half of all smartphone users in the states are iPhone users and none of them are accessing 5G speeds at the moment. When they do, overall data speeds in the country will rise.
The popularity of the iPhone in the states is bound to get consumers excited about 5G once the iPhone 12 models are introduced by Apple, possibly as soon as next month. As Open Signal said, “The lift which 5G brings highlights the importance of the upcoming 5G iPhone launch to Americans and to U.S. carriers. If we see a similar leap in experience by adding 5G capability to the iPhone then this will raise the average mobile network experience of the U.S. significantly because almost half of Americans use the iPhone according to Counterpoint.

Apple iPhone users each have different experiences depending on the carrier they use. The seven different iOS-powered handsets released by Apple between 2018 and 2020 have the fastest download data speeds on AT&T and the fastest upload speeds over T-Mobile. 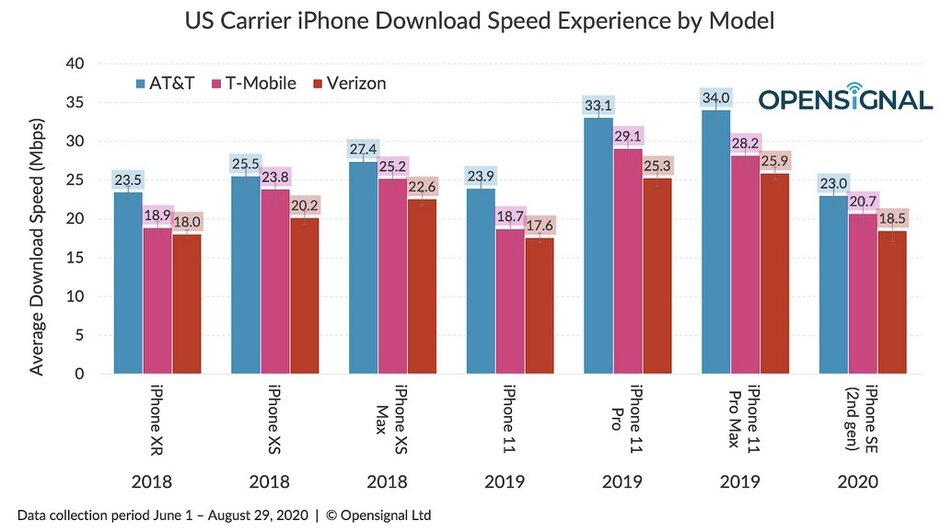 According to the new report, those still using older iPhone models that were released between 2013-2016 are most likely to update to a 5G iPhone. That is because the aforementioned models deliver download data speeds between 7.9 and 9 Mbps, much slower than the 29Mbps achieved by the iPhone 11 Pro and the even faster speeds coming from 5G phones made by other brands. The report notes that “iPhone users who have likely had their phone for three years or more, and so are likely out of contract and ready to upgrade, do have much slower speeds. Average download speeds for models released in 2017 are just under 20 Mbps or 31% slower than users of 11 Pro models. Those with models four years of older see even slower speeds ranging between 7.8 Mbps and 15.9 Mbps.

When it comes to 5G, the U.S. is not even in the top of the first inning yet; in fact, the players have yet to take the field. Eventually, we can expect Verizon, T-Mobile, and AT&T to use a combination of low-band spectrum, mid-band spectrum, and high-band spectrum to cover the country with the incredibly fast download data speed and low latency required to make the future happen. We are talking about self-driving vehicles, super-speedy downloads, AR and VR capabilities, and more. 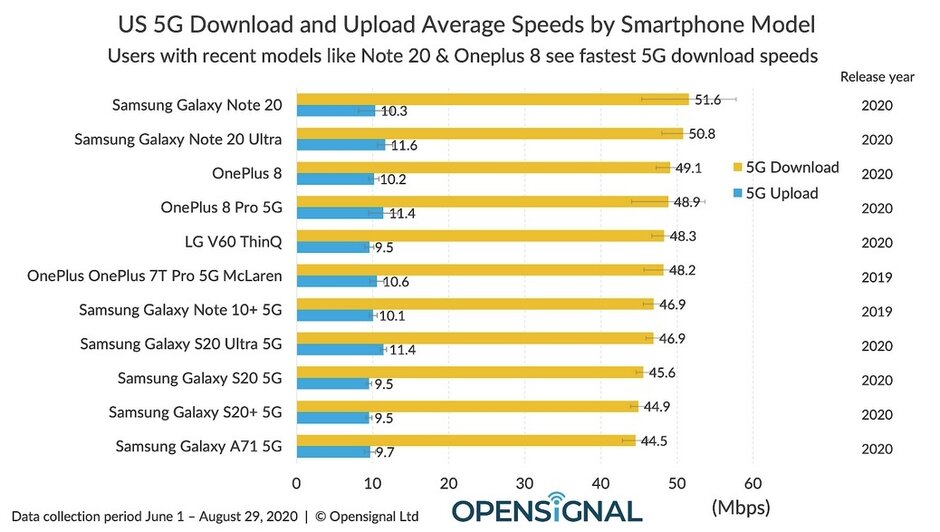 The Samsung Galaxy Note 20 is the fastest 5G phone in the U.S. according to OpenSignal