Apple (AAPL 1.01%) is the world’s largest company, Warren Buffett’s largest holding, and one of the most successful stocks of this millennium.

However, even with a record that impressive, its management team is not resting on its laurels. In order to improve its products and maintain or expand its already-high margins, Apple has embarked on a new strategy: to design more and more of the semiconductors that will go into its smartphones, computers, and other electronic devices.

This plan entails some risk, but also could deliver a lot of advantages for Apple if it’s successful. On the other hand, its strategy should continue to be an overhang for major component suppliers Qualcomm (QCOM -0.25%), Broadcom (AVGO 0.58%), and Skyworks Solutions (SWKS -2.10%).

When a company manufactures more of the sub-components that go into its end devices, that’s a strategy called vertical integration.

Of note, this has been an aspect of Apple’s brand since its founding. Unlike other device makers, Apple never used the industry standard Windows operating system for PCs, nor the Android operating system for smartphones. Rather, Apple has its own proprietary macOS and iOS operating systems, which allow for tighter integration with hardware components and design.

So, Apple has always married proprietary software with its hardware. However, its expertise has been in design, not making the semiconductors for its devices. In the 20th century, semiconductor manufacturing was expensive, and required lots of design and manufacturing expertise.

However, as Apple got bigger, it gained more resources to invest in research and development. In the 2000s, the semiconductor industry also began to gravitate toward an outsourced foundry model under which third-party chip manufacturers gained snowballing manufacturing expertise and scale while letting “fabless” chip designers operate without shouldering the high costs of owing the manufacturing infrastructure. That meant Apple could build its own internal chip designer.

In 2010, Apple unveiled its A-series system-on-a-chip for the iPhone, which contained a proprietary CPU and GPU, along with other intelligence. Then in 2020, Apple dumped Intel‘s processors for its Mac computers and replaced them with its own M-series CPU processors. In 2019, Apple bought the Intel unit that manufactures cellular modems — the hardware components that connect cellphones with mobile cell towers. While Apple has not yet been able to stop using modems from  Qualcomm (the dominant player in that niche) in its phones, it plans to transition away from them by 2024 or 2025, according to Bloomberg. And just a couple of weeks ago, Bloomberg reported that Apple was looking to replace Broadcom’s radio frequency and wireless charging chips with its own proprietary chips by 2025. Bloomberg also reported Apple is looking to replace various chips from Skyworks in the future, though its plans on that front aren’t definitive yet.

The risks and rewards for Apple

Obviously, if Apple is designing its own chips, it has to invest in research and development. Moreover, there is the risk that Apple’s internal teams won’t be able to devise better components than its current suppliers, which, after all, specialize in chip design.

On the other hand, the apparent potential benefits seem to outweigh the risks. First, because Apple can coordinate its component design into a single end product, its engineers should be able to design chips that perform optimally with each other in the context of a whole device system.

In fact, the margin savings it has already achieved via in-house component design have already been substantial. Even though the past year featured high cost inflation for the company due to elevated materials and shipping costs, Apple surprised tech watchers in September by keeping prices for the iPhone stable, and prices for the Apple Watch at lower-than-expected levels. It’s estimated that replacing Intel chips with its in-house Series M chips in Macs alone is saving Apple $2.5 billion per year in licensing fees. 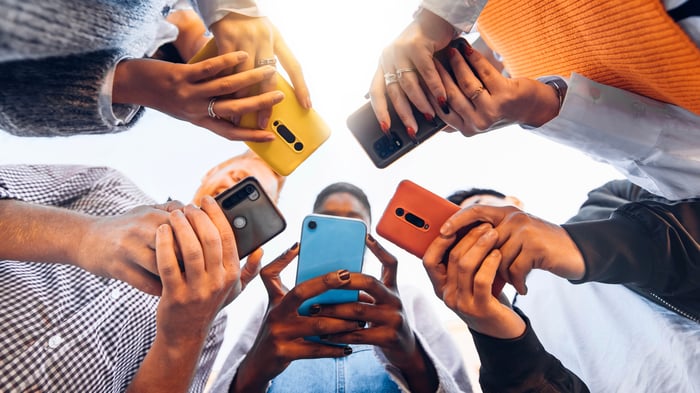 Who is at risk?

Obviously, the likelihood of losing some or all of Apple’s business  could be a headwind for shares of Skyworks, Broadcom, and Qualcomm. In the past year, Apple accounted for roughly 21% of Qualcomm’s revenue. However, even if Apple is able to replace Qualcomm’s chips with its own, it may have to continue paying patent licensing fees to the chipmaker. So Qualcomm may not lose 100% of its Apple revenue.

According to Bloomberg, Apple also accounted for about 20% of Broadcom’s revenue. So for that component maker, the risk — assuming its components are replaced in 2025 — would be greater. And while there have been no definitive reports confirming that Apple’s planning to phase out its use of Skyworks’ components, that would be a much bigger deal for the company: Apple accounts for 58% of Skyworks’ revenue.

It’s also not as if these companies are standing still. Qualcomm has been gaining market share in high-end 5G phones from other vendors, and has been aggressively growing its newer auto and Internet of Things (IoT) chip units. Broadcom is in the midst of attempting to buy software giant VMware for $61 billion. And Skyworks has begun attempting to diversify away from Apple, acquiring Silicon Laboratories in 2021.

Which stock is the better buy?

These three Apple suppliers will likely trade with the Apple overhang for the next few years at least. And while each company should survive and diversify their businesses away from dependence on the iPhone giant, that could be expensive to do, as Broadcom’s massive VMware bid is showing.

Meanwhile, it appears as though Apple plans to continue deepening its technology moat and widening its control over its supply chain. So despite its much higher valuation, Apple’s superior market position makes it a safer play for investors.

On the other hand, the relatively cheaper valuations of Skyworks, Broadcom, and Qualcomm could lead to upside surprises, should their other sources of revenue in auto, IoT, and other types of chips do better than expected, or should they be able to hold onto their Apple revenues longer than expected. Yet while outsized gains are possible for these suppliers, that’s less assured than Apple’s continued strength.