The Daily Orange is a nonprofit newsroom that receives no funding from Syracuse University. Consider donating today to support our mission.

Bruno and his little brother Marco Gonzalez Hauger created the app Ambassadoor after realizing that people with less than 10,000 followers — Bruno calls them “nano-influencers” — could be used to promote businesses. Businesses involved so far include XO Taco and Original Grain, Bruno said. Businesses and people can join the app at any time.

Ambassadoor allows the user to promote a brand or business of their choice on Instagram. Users receive around five to six cents multiplied by their average number of page likes, Bruno said. It’s currently on Apple’s App Store, but Bruno hopes to expand out to other platforms, such as Google Play in the future.

The idea for Ambassadoor first came to Bruno in November 2018 while he was working for TNH Student Advertising Agency at the S.I. Newhouse School of Public Communications during his sophomore year. Bruno was helping one of his clients, the Vermont Department of Tourism and Marketing, get more influencers.

While searching through blogs, Bruno realized that social media influencing could be done using local people with “real opinions” instead of mega- or macro-influencers, such as Kylie Jenner or Kim Kardashian. The process would also be cost-effective for companies paying a nano-influencer much less than a mega or macro one.

The idea brewed in his head for a couple of days. When he realized it could be made into a company, the first thing he did was call his tech-savvy younger brother.

“Bruno is always a person that has some cool business idea in his head, and I’ll be honest, most of them are not very good,” said Marco, a senior in high school. “But the first time I heard Ambassadoor … I was like, ‘No way this hasn’t been done before.’”

After a 30-minute phone call, Marco began looking all over the internet to see if anything like Ambassadoor had been created. It hadn’t, so the two began working on the company, with Bruno being the CEO and covering the financing and marketing, while his brother is the chief technology officer and deals with the “front-end” of coding the app by creating the user interface. 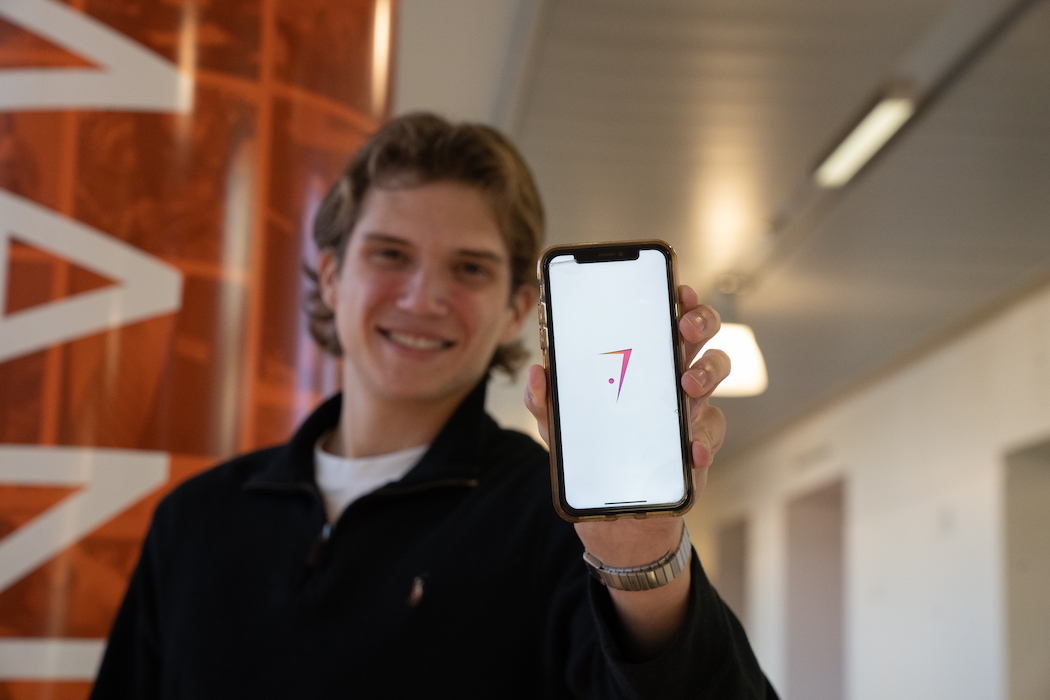 They also hired a student developer and later a programmer based out of Chennai, India, to work on the back end of the app, or dealing with the code that communicates with the database and the internet, as well as some algorithms, Marco said.

Ambassadoor soon became a passion project for Bruno, and he spends more time working on the business than he does on school work. But Bruno used school resources to his advantage while creating the app. One of them was his Introduction to Entrepreneurship and Emerging Enterprises professor David Park.

Park, an assistant professor of entrepreneurship at the Martin J. Whitman School of Management, said Bruno approached him with the idea of the app during his time enrolled in the course. But even after Bruno finished the class, he would still look to Park for advice, either by coming into his office or bumping into him in Whitman hallways to chat. Park said that there’s normally only a handful of students who continue the business plan they created in EEE 370 into a real business.

“(Most of the time, business ideas), including Bruno’s idea, (are) to solve very big problems in our society,” Park said. “I’m all for it. I’m really happy and excited about Bruno’s Ambassadoor.”

Park also taught Bruno about the importance of funding. Bruno and Marco have already begun the company through self-funding along with earning funds through business plan competitions, such as the School of Information Studies’ Raymond F. von Dran Fund for Student Entrepreneurship pitch competition. This year, Ambassadoor won first place in the tech and entertainment category and was awarded $7,500, Bruno said.

Ambassadoor recently competed in the Panasci Business Plan Competition, a campus-wide student plan competition run by the Falcone Center for Entrepreneurship. It was the brothers’ second time competing, and they got further than they did in 2019, but lost in the final round.

Bruno is motivated to make his company even better after the loss and knows that he has come a long way in the past year. He feels the long hours he puts in are worth it and that the company has made great progress. Being an entrepreneur is all about those late nights and learning from failure, he said. And after he graduates, Bruno won’t abandon the company, in fact, he wants to make it his career.

“I want to change the advertising industry,” Bruno said. “Advertising needs to be more in the hands of the people.”

Poco X3 review: How good is this mid-range smartphone? | ZeeBiz...