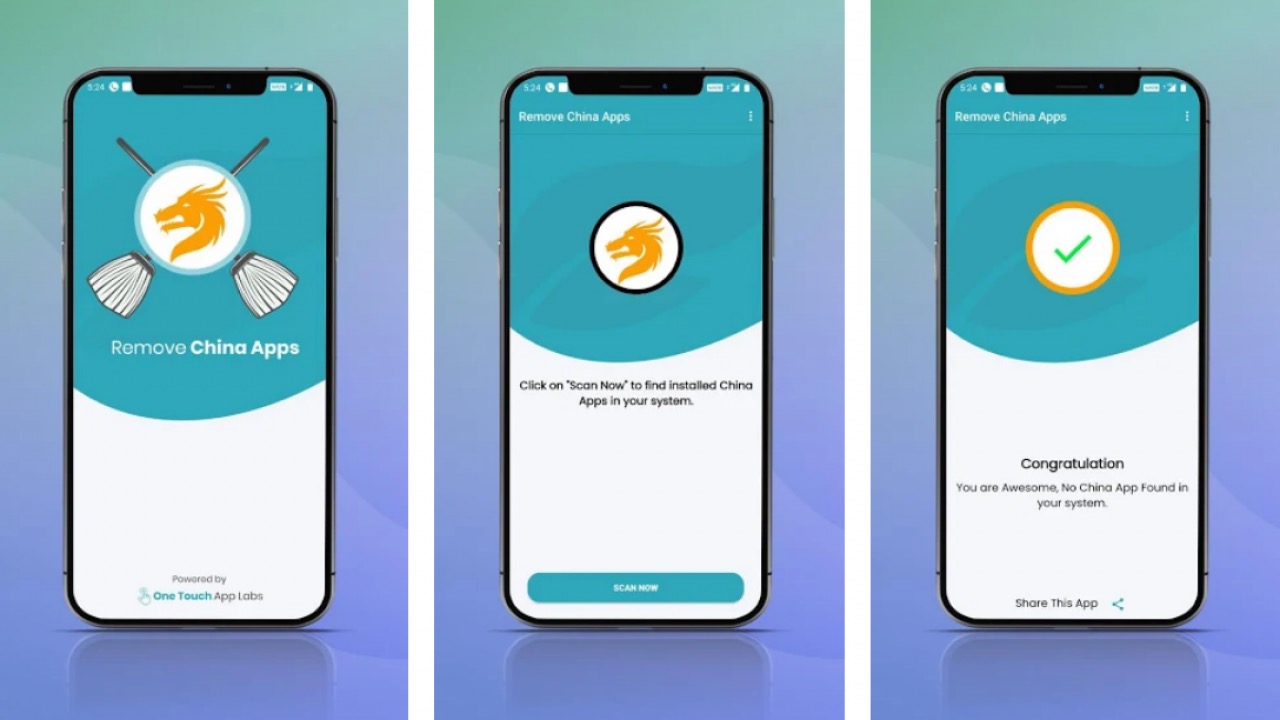 A few hours after removing the Mitron App from Play Store for violating its spam and minimum functionality policy, Google has cracked down on India’s top-trending ‘Remove China Apps’ mobile app. Google cited a violation of its ‘Deceptive Behaviour Policy‘ as a reason for its removal.

The app, developed by a Jaipur-based start-up OneTouchAppLabs, the Remove China app has been downloaded more than 5 million times since May.  Originally created as an educational tool, the app used its ability to identify the country of origin of apps on Play Store to help users detect and delete apps developed by Chinese firms.

A report published on TechCrunch says the app was removed under Play Store’s deceptive behaviour policy which states that developers cannot make changes to a user’s device settings or features outside of the app without the user’s knowledge and consent. It can also not encourage or incentivise users into removing or disabling third-party apps on their devices.

The app gained popularity after several influencers in India mooted a boycott of all things Chinese amidst growing anti-China sentiment over fresh Sino-Indian tensions on a lingering border dispute. Taking to Twitter, the creator of this app shared a message to all those who downloaded it and offered a tip on how to find the country where any app on Play Store is developed.

Dear Friends,Google has suspended our #RemoveChinaApps from google play store.Thank you all for your support in past 2 weeks.”You Are Awesome”TIPIts easy to find the origin of any app by searching on googleby typing

Given that India’s booming smartphone market, the second largest in the world in terms of usage and production, is replete with Chinese brands is being pointed out as a reality check by economists and some members of the political parties opposing such social media hype.

The issue is not limited to apps or the Play Store. In recent times, the ByteDance-owned TikTok faced public ire in India for removing a video created by an acclaimed influencer. The Chinese firm continues to grapple with the content moderation efforts that led to the latest outcry from a section of the social media. The video has since been reinstated with TikTok claiming its removal in the first place was part of a rigorous review process.

Chinese investments in India’s smartphone industry itself is worth millions of dollars with OnePlus, Oppo and Xiaomi being major contributors to this growing trend. In April, India had amended its foreign direct investment policy by enforcing tougher scrutiny of such proposals from Chinese companies.

What caused the latest trend?

The latest boycott Chinese products was initiated by engineer-turned-educator Sonam Wangchuk who released a couple of videos that said deciding not to use products from a country is not akin to spreading hatred. The social innovator, who inspired a breakout character in a Bollywood blockbuster ‘3 Idiots’, has seen his videos garnering millions of views on social media platforms.

The Chinese media too has responded in kind to the social media response in India suggesting that by allowing “irrational anti-China sentiment” to continue, the government risks ruining bilateral relations. Prime Minister Narendra Modi and Chinese President Xi Jinping have continuously engaged with each other over the past six years on matters related to defence, border disputes and economic cooperation.

Shooting reported at site of protest in Louisville, Kentucky – Beaumont...