Teabagging. If you don’t think too hard about it, the word sounds almost classy. One might envision a wealthy British person seeping a fancy blend of Earl Grey in a pot of hot water.

But that image would be very, very wrong.

In video games, “teabagging” describes the act of a player (usually an enemy competitor) repeatedly crouching up and down over another player. It’s a universal taunt that people use in fighting games, FPS games and sports games.

Though it may not be inherently obvious in the video, that’s an evolution of the teabag. The term derives from a very specific sexual act.

In fact, filmmaker John Waters was the first to popularize the term “teabag.” In an email interview with Boing Boing published in 2009, he shares the following:

“‘Teabagging’ is by my definition the act of dragging your testicles across your partner’s forehead. In the UK it is dipping your testicles in your partner’s mouth. I didn’t invent the term or the act but DID introduce it to film in my movie Pecker. ‘Teabagging’ was a popular dance step that male go-go boys did to their customers for tips at The Atlantis, a now-defunct bar in Baltimore.”

But perhaps the group best known for evangelizing the teabag wasn’t male go-go boys. It may have been a far less likely group: gamers.

It would be impossible to trace teabagging to a specific player or group of players. In fact, there’s no consensus as to which game was the first to embrace the teabag. It likely began with Counter-Strike or Quake in 1999, as Kotaku suggests.

However, gamers truly started embracing the fine art of teabagging with the 2001 release of Halo: Combat Evolved.

This game was unusual in that after one player killed another player, the dead player could still see their screen for a few moments, Know Your Meme notes. This was just enough time for the other player to taunt the downed player.

But in a game with only so many mechanics, there are a limited number of ways a player can taunt. Sure, they could have shot their gun, and certainly, some people did. But something about the action of teabagging seemed so much more visceral. The taunt and its meaning circulated throughout the Halo community. But it wouldn’t stop there.

While Halo would become known as the real genesis of in-game teabagging, the act extended to other games that had crouch mechanics. In everything from World of Warcraft to Street Fighter II, quick and repeated couching came to signify the ultimate taunt.

As a fun aside, the female character equivalent of this is known as “clam clamming,” Giant Bomb reports .

It would be remiss not to touch on the act’s homoerotic undertones. The act became popular in the early 2000s, a dark period in history where anti-gay politics flooded the mainstream.

Still, though that may have been a saggy wrinkle in teabagging’s genesis, that meaning seems to be lost on some. Others fully reject it. If there are many popular gamers who continue to embrace that meaning, they are a limited and egregiously toxic few. Moreso, these players do it because they find it funny, or else they use it as a strategic play to mess with an opponent’s psyche.

In 2017, SonicFox, the nonbinary fighting game champion who came out as gay in 2018 but has more recently described his sexual orientation as “probably pansexual,” admitted to using teabagging to antagonize his opponents.

I often use tbaggin as a way to make the opponent crack or get angry as well too. Dirty but efficient if you get tight easily 😛

A Legacy That Withstands The Test(es) Of Time

Though it’s been two decades since gamers first taunted other players with teabagging, the legacy lives on. In the modern era of gaming, there are few nonverbal taunts that can elicit a reaction like a well-timed teabag.

At this point, most such instances of so-called teabagging look nothing like an actual teabagging might look like in real life. In fact, a person from outside the gaming community would lack a clear understanding of why this is such a toxic behavior among gamers. It’s become a symbol. One might liken it to a digital middle finger among gamers.

It’s not the sexual act itself that causes ire. Rather, it’s this implied meaning behind it. After a particularly challenging fight, a miraculous victory by an underdog or even just a video game troll using toxicity as a means of humor, the teabag is a sign of dominance. It’s not unlike a dog humping another dog.

In a 2015 article, a Polygon writer boiled down teabaggers to two types of players:

“The first is you’re a kid who doesn’t know any better; if that’s the case, then chances are you’ll stop being a dick once you grow up and realize there is more to life than being an asshole on the internet,” Dan Le Sac wrote. “Sadly, the second motivation is somewhat bleaker. For some reason you feel it’s right to tell your opponent that they are less that you, and you are happy to say that you don’t feel that basic social politeness applies to you.”

Some people can brush it off, seeing the humor in such an act. Others, however, take teabagging very personally. Some of it depends on the players’ headspace — did the teabagging seem good-natured after a challenging? Or was it intended as an act of superiority and humiliation? Even prominent gaming personalities are split on the issue.

Pretty disappointed in all the embarrassing teabagging moments on Overwatch League today 😒 cmon boys grow up, you’re just being rude and wasting your teammates time

Teabagging, Tactical Crouching, The Taint Touch and all that good stuff is just part of the fun of competitive gaming. If we can’t do that then what are we all doing this for?

1v1 me on shipment if you disagree 🤣

I have two different teabags:

2.Fuck you teabag:Rapid fire crouch spam nuts to the face, 2 clips of R99, thermite and a mean uppercut

Context also matters. When a player does a sneaky play, only to find themselves outplayed by an opponent, perhaps the opponent deserves a moment of teabagging. But, when four players see a popular esports pro’s name in the kill feed, track that player down, gang up on the pro and then still teabag that player, that’s toxic. It doesn’t honor the team’s skill; rather, it’s a display of hostility.

Though Steeped In Controversy, Teabagging Is Here To Stay

So, is it time to put the teabag out to dry? Many gamers would say no. Sure, it’s fairly toxic. And yes, it can be a source of true gamer rage. But it’s also a part of gamer culture.

In fact, in the game Destiny 2, players were adamant that the game should have a teabag emote. The emote wouldn’t be of someone actually teabagging another player — players can already do that using the game’s crouch mechanic — it would show the player dunking a tea packet into a cup of hot water. While the devs never did give players such a spot-on emote with so much room to promote toxicity, it did offer the Cup of Tea emote, which shows a player preparing a cup of tea and drinking it. It was a lighthearted, funny way to convey the meaning of the teabag without being so on-the-nose about it.

Not everyone will choose to teabag — after all, in an era where streaming is a viable career, few players want to be known for their toxicity — but it’s also a throwback to the hours and hours of gameplay players put into the games of the past. Those who can shrug off its toxicity see it instead as a lighthearted troll.

Without teabagging, options to tease and disparage competitors would be far more limited. Perhaps some people prefer the subtlety of an out-of-context tactical crouch mechanic to the prospect of hateful trash talk, threats and worse.

Because, much like a pair of testicles, those other options would be very hard to swallow.

READ NEXT: Redditor Makes Incredible Master Chief Bust Out Of 58 Pages Of Cardstock

Animal Crossing: New Horizons – I Bought The “Top 8 Cool Hairstyles” Pack So You Don’t Have To 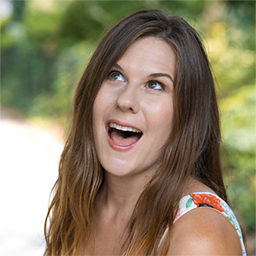 Whitney Meers is a lifelong gamer and professional writer whose credits include Newsweek, Comedy Central, HuffPost, NBCUniversal, Samsung, The Discovery Channel and truTV. She regularly contributes to Frederator Digital’s YouTube gaming channel The Leaderboard, which recently surpassed a million subscribers.
As a former Top Writer on Medium, she wrote several of the site’s most widely circulated satirical pieces throughout 2017 and 2018. Her personal essays have appeared on xoJane and Everyday Feminism. Additionally, she served as the consulting lead on Newsweek’s Fortnite Special Edition, securing interviews with numerous gaming personalities including Ninja, DrLupo, TimTheTatman and Pokimane.
Whitney has a comedy background and has written and performed in various live shows including 8 Bits: A Sketch Show About Video Games at New York’s Upright Citizens Brigade Theatre. She was a house team member on the sketch comedy team Slap Fight at The People’s Improv Theater, also in NYC.
A versatile content creator, Whitney also produces gaming videos, makes gaming-related fan art and writes genre-bending scripts for film and television. Her pilot script Recession Proof was nominated for the TVWriter.com People’s Pilot award in 2011 and was later optioned and produced by an independent production company.
Occasionally, Whitney streams on Twitch, where you can watch her battle royale her way through code:leaf errors in Apex Legends. Twitter / Instagram: @whitneymeers YouTube: youtube.com/wmeers

Video Games Are a Great Way to Pass the Time and Keep You Connected. Here’s How to Get Started – TIME

The many ways video game development impacts the climate crisis

Star Wars Blu-rays, video games, and collectibles on sale for May 4 – Polygon

How Amazon builds games by working backward from players

Crucible is Amazon’s answer to Valorant and Overwatch, launches May 20

Snatch up a 10-pack of respirator face masks for $45