It’s been rumored off and on again that Apple will someday provide reverse charging for an iPhone that could recharge accessories. An October 2020 (repeated again in 2021) MacRumors report pointed an FCC filing supporting such a feature. Then in February 2021, Mark Gurman claimed that wirelessly recharging accessories was unlikely in the near future.

Last Thursday, the US Patent & Trademark Office published a patent application from Apple that relates to a new wireless charging system using bimodal magnetic alignment components for alignment of devices. In the future, the back of a future iPhone could include this new wireless recharging system and enable  wirelessly recharge accessories such as AirPods and case, Apple Watch and more. Apple’s current wireless recharging on the back of an iPhone is limited to a large sized coil that can’t support charging smaller devices like an Apple Watch.

However, sometimes the alignment of the magnets can be impossible to set correctly. In a video from iDeviceHelp, we see how Apple’s wireless recharging works with a device like Apple’s MagSafe battery pack. However, when author tried to actually recharge AirPods in their case, it failed, even though the recharging light temporarily lit up. The author of the video surmised that it was likely only a software fix. Yet one of Apple’s latest patent applications published last Thursday makes it clear that it’s not as simple as a “software fix” but rather having to introduce a new kind of wireless recharging battery design using bimodal magnetic alignment components.

Apple further notes in their summary, that among other factors, the efficiency of wireless power transfer depends on the alignment between the transmitter and receiver coils. For instance, a transmitter coil and receiver coil may perform best when they are aligned coaxially. Where a portable electronic device has a flat surface with no guiding features, finding the proper alignment can be difficult.

Often, alignment is achieved by trial and error, with the user shifting the relative positions of the device and charger and observing the effect on charging performance.

Another option is to provide two separate magnetic alignment components (one primary and one secondary), but this may also entail providing additional inductive coils and/or other electronic components, all of which can add to the size, weight, and manufacturing costs of the device. 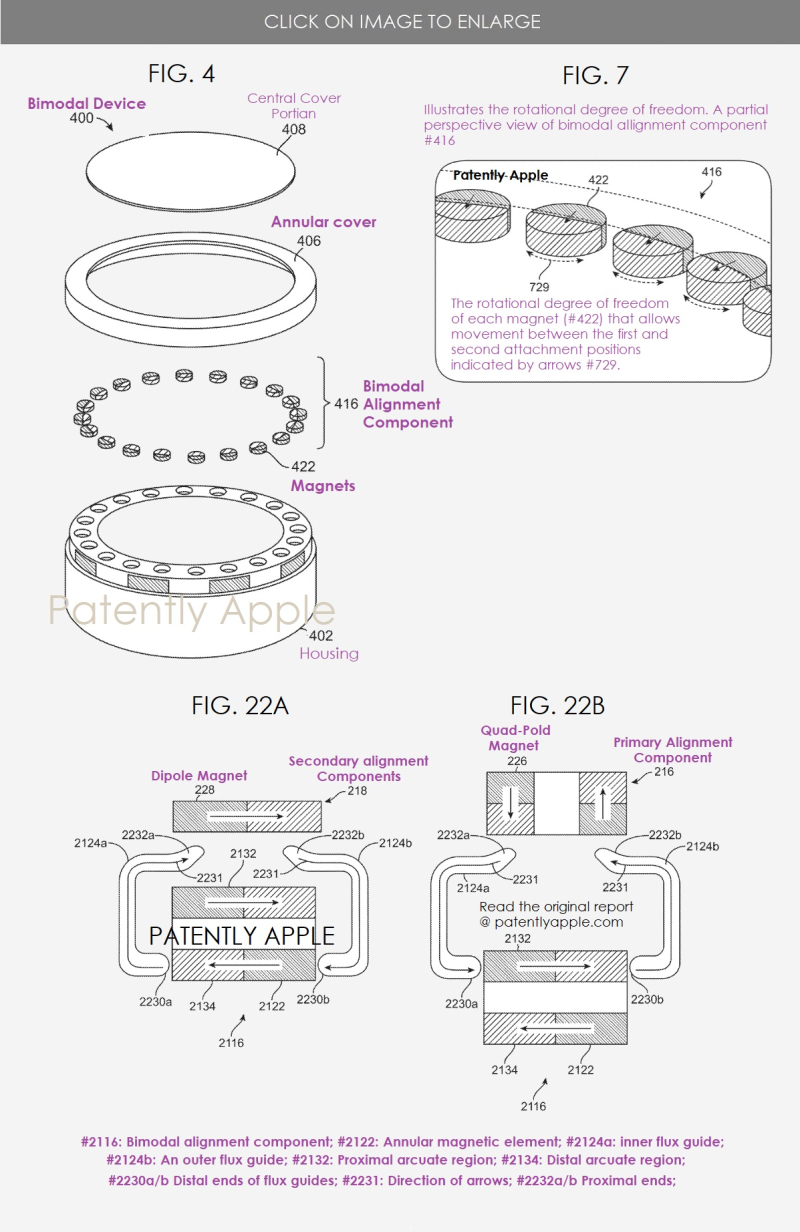 Apple’s patent FIGS. 22A and 22B above show simplified cross-section views of a bimodal alignment component in two different attachment positions.

This is a highly technical patent. For engineers and super geeks wanting to dive into the finer details, review Apple’s patent application number US 20220416590 A1.