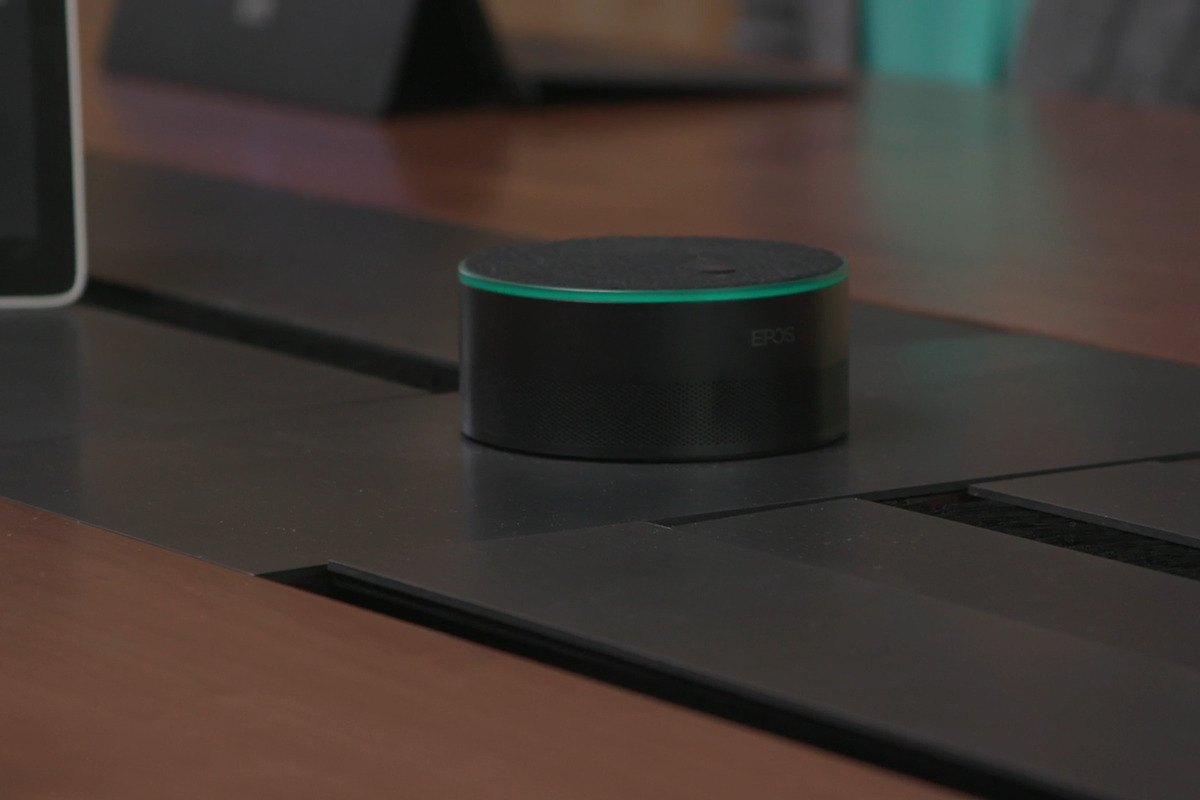 During a Microsoft Ignite keynote by Jared Spataro, the vice president of Microsoft 365, Microsoft showed off a demonstration room powered by some of its latest hardware, including the 85-inch Surface Hub 2S, plus companion devices like Teams Rooms, which are third-party bundles of cameras and small displays for facilitating meetings.

Microsoft’s idea is that the Teams Rooms devices will manage the meetings, with voice assistance using Cortana, and capabilities like Teams casting and the Room remote app for facilitating conferences. One of the key capabilities of the Microsoft Teams software is its ability to listen to, record, and transcribe the conversation. Those capabilities are coming to Teams as a recap of the meeting, complete with a recording, transcription, and shared files.

Apparently, however, Microsoft will need external speakers, both to broadcast people’s voices and act as additional microphones for the videoconference. Enter the so-far-undisclosed Teams speaker.

The Teams speaker was shown off during a segment of the presentation in which Aya Tange, a Microsoft product marketing manager, showed off new hardware. Tange said the new speaker will allow attendees to spend less time note-taking and follow the conversation more easily. “This will help meetings become more inclusive for both remote as well as in-room attendees,” she said.

The speakers do appear to be Cortana-powered. “Cortana, end my meeting,” Tange said, ending the demonstration. Microsoft representatives hadn’t responded to a request for comment by press time.

Microsoft confirmed the speaker’s presence. “We are bringing to market next year a new category of intelligent speakers for Microsoft Teams Rooms with EPOS and Yealink as partners at launch,” a Microsoft representative said in an email.

In 2016, Microsoft was talking optimistically about Cortana as a consumer AI product, appearing in connected IoT devices like smart fridges as part of Windows IoT Core. Microsoft later signed a deal with what was then Harman Kardon for a Cortana-powered suite of connected-car speakers. (Harman Kardon was purchased by Samsung in 2017 for about $8 billion.) That partnership brought forth the Harman Kardon Invoke, a connected smart speaker for the desktop that competed with a number of other Alexa and Google Assistant-powered devices, though the Invoke emphasized its audio quality as much as anything else.

Microsoft’s repurposing of Cortana is clearly veering away from consumer-focused AI, and moving toward becoming a business tool. After all, Microsoft spent its first few hours of Ignite talking about how Cortana-powered services like Play My Emails and the Daily Briefing email are rolling out for Outlook for iOS and Android. Will “connected business speakers” be Microsoft’s next hardware effort?

Note: When you purchase something after clicking links in our articles, we may earn a small commission. Read our affiliate link policy for more details.
READ  Adidas' latest A-ZX sneakers are a collab with Lego

The best spacecraft of all time

Why did Peloton recall Tread and Tread+? Plus how to return them for a refund

Disney teases a 'real-life' lightsaber: Shut up and take our money!

Best flashlight pouches 2021: Keep your torch protected and at the ready with a dedicated holster

What is Shimano Steps and what does it bring to your ebike?

What tech are you most looking forward to? Here's how to let us know

Your private passwords could be exposed by making these 3 simple...