These complaints often centre around driving dynamics worsened by their higher centre of gravity, poorer space when compared to other hatchback, wagon and sedan alternatives, as well as being less economical when also compared to that same competitor set.

Well, let me say just quietly to all of those naysayers – well, 300 of them to be exact – that they have no more excuses.

Now is the perfect time for them to put their money where their mouth is – the 2020 Skoda Superb 200TSI Scout is, what I believe to be, the perfect alternative for that crowd.

Allow me to digress. After living with our Discovery Sport long-termer, I have begun to change my tune ever so slightly towards SUVs. I was never a hater, and I’d always recommend one to those whom I know have already subconsciously made their mind up about one, but I’d never once woken up and said, “It’s time”.

However, after enjoying the company of our orange Land Rover, I’ve come to realise what SUVs are good for, and give some credit where it is due. That hasn’t stopped me from lusting for and preferring a wagon, mind you.

It’s a bit of a shame that the Superb Scout 200TSI will remain as a special-edition product given its wonderful and joyous traits.

But by the same token, I do – like Skoda Australia also I assume – suspect that the take-up rate of this lifted Skoda wagon will be fast and swift by those few genuinely alternative folk, with demand surely ceasing to a halt thereafter.

It seems wise to not create an aged-stock problem and limit its quantity, then. As I said, a shame, but understandable. 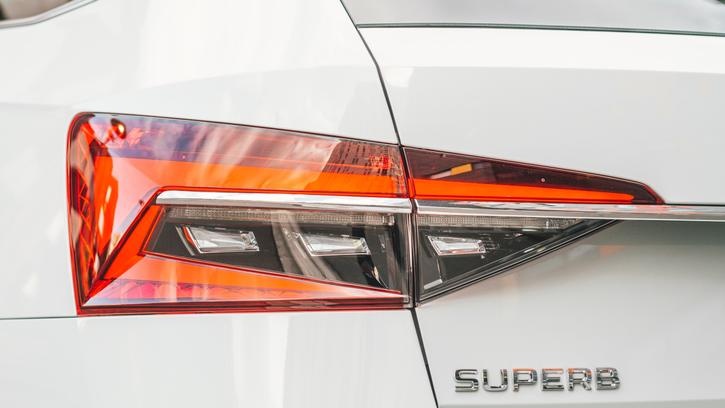 The single greatest thing about the Skoda Superb Scout is the way it rides. Compared to the regular wagon, the Scout’s ride height has been lifted by 15mm to bring its total ground clearance to 151mm.

There is no pseudo-sports suspension tune, huge wheels, or anything of the like interfering with the zen-like experience that the Superb Scout offers. It has been purely calibrated for relaxation, with its ride emitting soothing, meditative qualities.

There is adaptive chassis control on board, which naturally firms up the suspension, but consider it an interruption to 90 per cent of the work you’ll be doing behind the wheel.

The Scout remains not an apex hunter, nor does it inspire such hoonery. That does not mean, however, that one shouldn’t attempt to thread a Scout through a nice section of back road, either.

Little bugged the Scout. I did take it down unsealed roads, and other really choppy pieces of tarmac, in an attempt to knock it off its throne, but those feeble efforts were met by a continual relaxed demeanour.

Where it did fall down, however, was in the field of body control. It isn’t crash hot, and there’s certainly a lot of movement courtesy of that higher ride height and the larger 235-section 45-profile tyres, but considering its suppleness it’s forgivable.

Here is where those adaptive dampers, when flicked to sport, do act to quash the magnification of mass-shifting that occurs. The suspension’s duality is not enlightening, however, so don’t expect a Jekyll-and-Hyde persona to arise from the mighty Scout. Maybe a character that’s more aligned to a Dalai Lama, instead. Calm, composed and well managed.

The inclusion of a 200kW turbocharged four-cylinder, similar to that found in the hotted-up Golf R, may initially strike some as being too juxtaposed to the suspension tune. Rather, the wafty calibration of this engine in the Scout further adds to its appeal. Power is sent to the Superb Scout’s all-wheel drive system through a seven-speed ‘DSG’ wet dual-clutch automatic transmission. 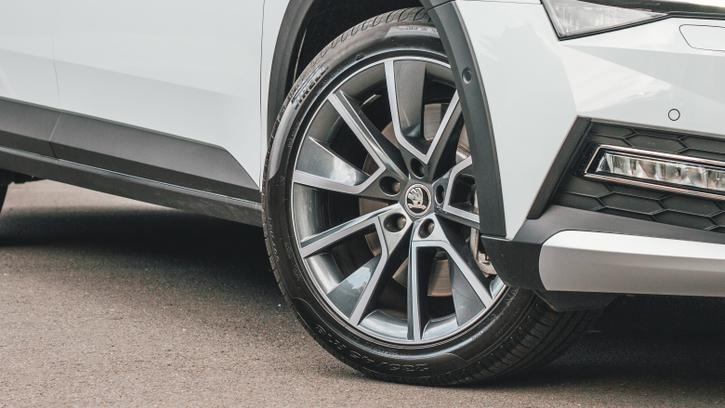 Combining that arrangement with a heightened tare mass of 1638kg means that any expected notions of ferocity become quickly blunted. It isn’t slow by any means, though, still feeling powerful under the foot, with its torque figure of 350Nm living up to expectations.

It just isn’t fierce like the other Volkswagen and Audi cars that also feature an engine very similar to this one. Yet again, more lethargic and collected about how it tangos.

On test, with driving slightly skewed more toward metro commuting than highway driving, the Scout returned an economy figure of 8.8L/100km versus an official claim of 7.1L/100km.

Interestingly, the Skoda Scout debuts something new for the brand in Australia – the introduction of a petrol particulate filter, or PPF. I have covered this in some detail in a news article that you can read here.

To sum it up for those pressed for time, this particular version of the Superb features Volkswagen Group’s latest engine technology that enables it to achieve Euro 6d-TEMP certification – the highest emissions standard in Europe, and light-years ahead of any Australian regulations or requirements.

In order to do this, the driveline employs a passive exhaust filter that’s designed to catch nasties before they exit out back. Due to this system’s passive nature, it does not require regeneration like a diesel particulate filter does. The petrol versions of this system naturally burn off in a much more regular fashion, as opposed to requiring certain situations in order to regenerate.

This all comes with one slight catch, however – this system will continue to operate as expected so long as the custodian of the vehicle fills the car with premium unleaded fuel only, so 95RON and above. Regular Australian fuel is of poor quality and contains high levels of sulphur, which Australian premium unleaded does not.

A small trade-off for some, although previous versions of the Superb have asked for a diet of 95RON even before the introduction of a PPF. Given the $61,990 drive-away price, Skoda is of the belief that owners will naturally do the right thing and fuel their cars accordingly. There is plentiful point-of-sale and other paraphernalia in dealerships to make any possible shoppers aware of this fact, too. 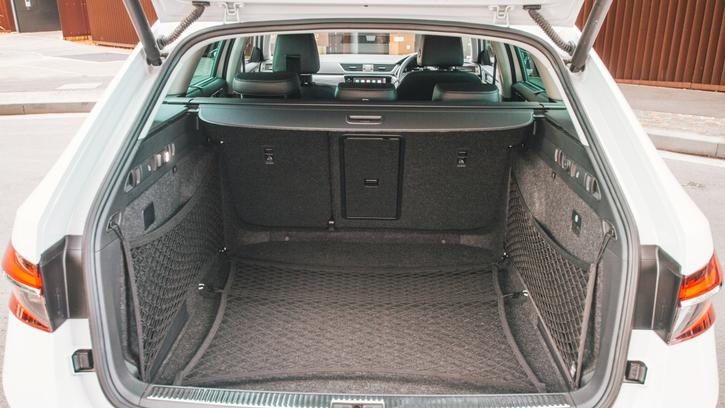 It’s a good thing for our market to access the latest and greatest out of Europe. Not only does it mean people can access cars that are less damaging to the environment, but also hopefully open the doors to other interesting products for Australia.

As it is the latest rendition of the Superb model range, the Scout comes loaded with plentiful tech. Matrix LED headlights are standard, which offer excellent night visibility via their uncanny nature to maintain a high beam, while seemingly masking the projection around things that need not be illuminated.

There’s also a full suite of active safety systems on board, too, be it blind-spot monitoring that also applies steering intervention should you begin to veer into an object located on the vehicle’s offside, full-speed autonomous emergency braking with predictive pedestrian protection, lane-keeping assist, as well as rear cross-traffic alert, too.

All of which makes for a safe package, and is topped off by a five-star ANCAP vehicle rating according to 2015 testing methodology.

The cabin remains clever and typical of the Skoda range, with umbrella holders located in either front door, a rear removable torch that also doubles as a cargo light, and boot-located rear seat folding levers.

However, the Superb 200TSI version in particular introduces a handful of nice, premium lashings, as similarly found in the Sportline version of the regular Superb wagon. The steering wheel is heated, the seats are shod with Alcantara, and there’s customisable ambient lighting for those who like to set the mood.

Infotainment is catered for well by a 9.2-inch touchscreen system that features Apple CarPlay and Android Auto connectivity, alongside an eight-speaker audio system created by German audio brand Canton.

I’ve found this stereo to be far more natural-sounding than the rather low-end heavy Dynaudio systems found in Volkswagen cars. After a bit of sampling with a control playlist that I feed through every car stereo that I test, I found it to be pleasing, and well catered to reproduce albums across a variety of genres. 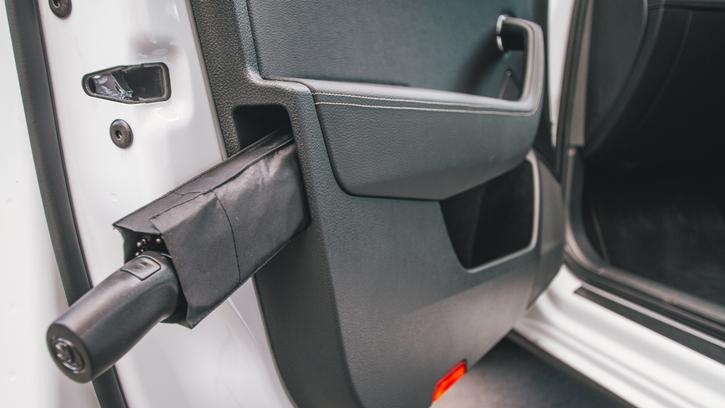 Getting in and out of the Scout is somewhat easier than the regular Superb wagon, too, given it is slightly higher off the ground. That’s a point that should likely appease those anti-SUV people who would like to benefit from one of an SUV’s better traits, which is high hip points, without having to dabble in their own self-proclaimed sacrilege.

It also doubles to make loading kids easier, too. It isn’t quite the same as an SUV, but you do notice the Scout’s overall height doing its bit to help prevent back strain.

There is plentiful room in the second row, enough to easily house a larger child seat or two across the rear bench, without overly compromising on the first row. Those in the second row are also treated to dedicated third-zone air-conditioning, alongside heated outboard seats and a 12V power outlet.

Young families, and their pets, will likely adore the cargo area more, however. At 660L it is huge, but its dimensions favour depth rather than width. This means you can throw in a folded pram longways, which leaves large amounts of widthways space to play with.

Fitting in said pram, a month’s worth of groceries and still having room to spare gives you an idea of how mega this boot area is.

After you close the foot-operated tailgate, you begin to notice what may be the only other downside to this car. Strange is maybe too harsh of a word to describe its aesthetic. Lovable yet dorky is probably more of a fun and friendly way. Its high ride height, big black cladding, and regular-sized 18-inch wheels all culminate in an ergonomic tour de force styling effort that’s catered specifically for the most anorak of anoraks out there.

You may get the odd eyebrow raise from the average punter, but who said that’s a bad thing?

For those anti-SUV people, here you have size, space, a great second row, heaps of tech, excellent fuel-miser technology as well as guts to boot, all wrapped up with a subjectively pretty bow on top. 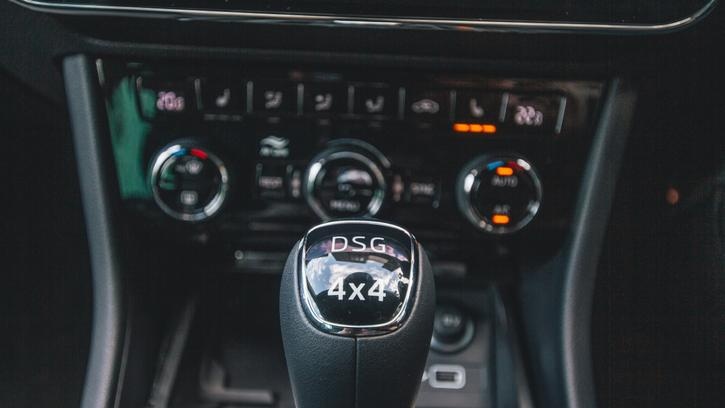 I grew very fond of this car, and I dearly hope all 300 are homed quick smart.

OnePlus Nord review: A return to its roots – The Indian Express

Poco M2 Pro Review: A Note in Poco Clothing, and we are Pro that! – TechPP

Designer to Create Shoes Made From Litter – Coastal Review Online