Tempe long has been the Valley leader in getting from Point A to Point B without a car.

The Rio Salado Underpass at McClintock Drive and the Western Canal Path Extension may be small in size but they create connections that allow continuous, off-street, low-stress riding and walking.

The Rio Salado underpass at McClintock Drive, on the southern bank of the multi-use path system, is the latest of several underpasses that Tempe has built along the Rio Salado, including at Mill Avenue, Priest Drive and Rural Road.

The path meets all necessary design requirements and travels under six lanes of traffic on McClintock Drive.

The Western Canal path extension, near Kyrene Road and Ken McDonald Golf Course, connects a missing link in the regional system. This project adds a half-mile, shared-use path and street improvements, that include lighting and landscaping and a signalized crossing at Kyrene Road.

The project is part of the regional canal-path system, the Maricopa County Sun Circle Trail, and is a corridor for the Brake route, which is among Tempe’s local bike boulevards. It links to the regional Highline and Kyrene multi-use paths and creates more than 12 miles of pathway along the Western Canal that connects Tempe to Chandler, Mesa, Guadalupe and Gilbert.

READ  GETTING THERE: Roundabout, intersection projects on tap | Transportation - Fredericksburg.com

Bicycle riders are expected to ride with traffic flow as with any bike lane, stop at stop signs, wear a helmet and use lights at night.

Tempe’s robust multi-modal transportation system, which moved to the forefront as its downtown morphed into an urban hub, includes 217 miles of bikeways, six neighborhood-circulator free bus routes, comprehensive bus network and nine light-rail stops. It’s the city’s attempt to make it easy for residents and visitors to bus, bike, walk or rail to their destinations.

In 2019, the League of American Bicyclists redesignated Tempe a Gold-Level Bicycle Friendly Community. With nearly 3 percent of Tempe residents biking to work, Tempe has one of the highest percentages of bicycle commuters in the country.

Because of support from Tempe City Council, Arizona State University, the community and non-profit organizations like the Tempe Bicycle Action Group, Tempe is among the leading bike communities in the country. 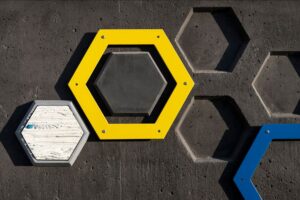 As part of the McClintock project, Tempe artist Zach Valent was commissioned to create a unique work of art.

Valent’s concept, Honey, uses aluminum, concrete tiles and pops of color that brighten the wall on the western side of the new underpass. The design is inspired by the scenery of the nearby wetlands and the relationship between man and nature. 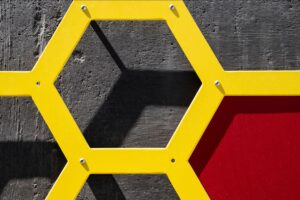 Bees have long been a symbol of colony and advanced civilization, showing how more can be accomplished by working together. The structure incorporates a range of basic shapes and primary colors to provoke the playful imagination of pedestrians as they travel east and west along the pathway.

Under the Hood of Pinterest’s Related Products Engine